News Analysis
1 week ago
by Ty Ross
0
- Advertisement Above -

The Trump Organization was found guilty of 17 felony charges, including criminal tax fraud, and was sentenced by a Manhattan court last week.

District Court Judge Donald Middlebrooks recently sanctioned the former President and his attorney Alina Habba nearly $1 million for what the judge determined to be an abuse of the legal and judicial systems with frivolous complaints.

According to MSNBC legal analyst Lisa Rubin, in his decision to sanction Trump and his lead attorney, Judge Middlebrook said the lawsuit against AG James is a “part of Mr. Trump’s pattern of misusing the courts to serve political purposes.” 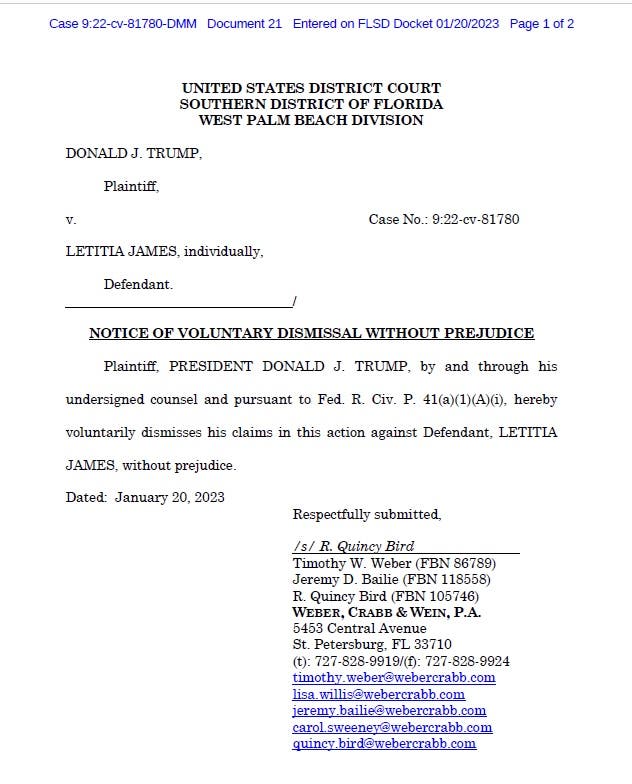 “None of the requisites for an injunction were met. I found that Plaintiff’s attempt to sidestep rulings by the New York courts by suing AG James individually rather than in her official capacity was plainly frivolous,” Middlebrook wrote.

I urged Mr. Trump and his lawyers to reconsider their opposition to AG James’s Motion to Dismiss because ‘[t]his litigation has all the telltale signs of being both vexatious and frivolous.’

Indeed, Middlebrooks recalled how, in denying Trump's "emergency" motion to enjoin the NYAG's case last month, he urged Trump to drop the case altogether because it "has all the telltale signs of being both vexatious and frivolous.” 8/ pic.twitter.com/XYFaytprkV

The unsuspected filing by Trump’s legal team comes less than a day after Judge Middlebrook ordered the former President and his lead attorney, Alina Habba, to pay over $938,000 in legal fees of former First Lady and Secretary of State Hillary Clinton, and nearly three dozen other defendants party to the outlandish and unsubstantiated claims of a dictatorial madman.

Perhaps it was a wake-up call for the litigious fledgling businessman that the court – and the American public – have tired of the baseless court filings, along with the former President’s “woe is me” shtick.

DELAYED REACTION: She finally claps back at Trump’s racist attacks on her, but not others