Rep. Joe Harding (FL-24), the Florida Republican responsible for Ron DeSantis’s discriminatory Parental Rights in Education Bill — also known as the “Don’t Say Gay” bill — is getting a triple dose of karma after being indicted on charges of money laundering, wire fraud, and making false statements.

The Justice Department alleges that between December 2020 and March 2021, Harding submitted fraudulent applications to the Small Business Administration to illegally obtain Covid-19 funds.

“Harding committed two acts of wire fraud by participating in a scheme to defraud the Small Business Administration(SBA) and for obtaining coronavirus-related small business loans by means of materially false and fraudulent pretenses, representations, and promises, and for the purpose of executing such scheme,” the DOJ wrote in a press release.

Read the press release below.

The GOP representative received over $150,000 in ill-gotten gains as a result.

The recently re-elected homophobe is alleged to have used the names of non-operating businesses on his applications for SBA Economic Injury Disaster Loans (EIDL).

And, according to the United States Attorney’s office:

“Harding obtained fraudulently created bank statements for one of the dormant business entities which were used as supporting documentation for one of his fraudulent EIDL loan applications.”

With his trial scheduled for January 11, 2023, Harding faces a maximum of 35 years in prison if convicted on all federal charges. He has pleaded not guilty.

“Today, I pleaded not guilty to federal charges that state I improperly obtained and used an EIDL loan issued by the Small Business Administration,” Rep. Harding said, according to Peter Schorsch at Florida Politics. “I want the public and my constituents to know that I fully repaid the loan and cooperated with investigators as requested,”  he continued.

In the meantime, Florida Speaker of the House, Rep. Paul Renner (R) has removed his party colleague from all committee assignments. While he didn’t directly condemn Harding, Renner did maintain the representative is “presumed innocent.”

In addition to being the one credited with making schools less safe for students and faculty members in the community with the widely criticized legislation, Rep. Harding frequently used social media to troll and mock those he disagreed with.

In March, Harding accused Democratic gubernatorial candidate, Nikki Fried, of wanting to “sexualize” children in response to a tweet she posted pledging support of LGBTQ students.

“To our LGBTQ+ students: I stand with you and I see you,” Fried wrote in her post. “When I’m governor, my top priority will be to make sure you are protected, not attacked.”

“To the parents of Florida: I stand with you and I see you,” Harding replied. “I’m sorry that there are people like below that want to take away your rights, sexualize your 6-year-olds and lie to you,” he continued. 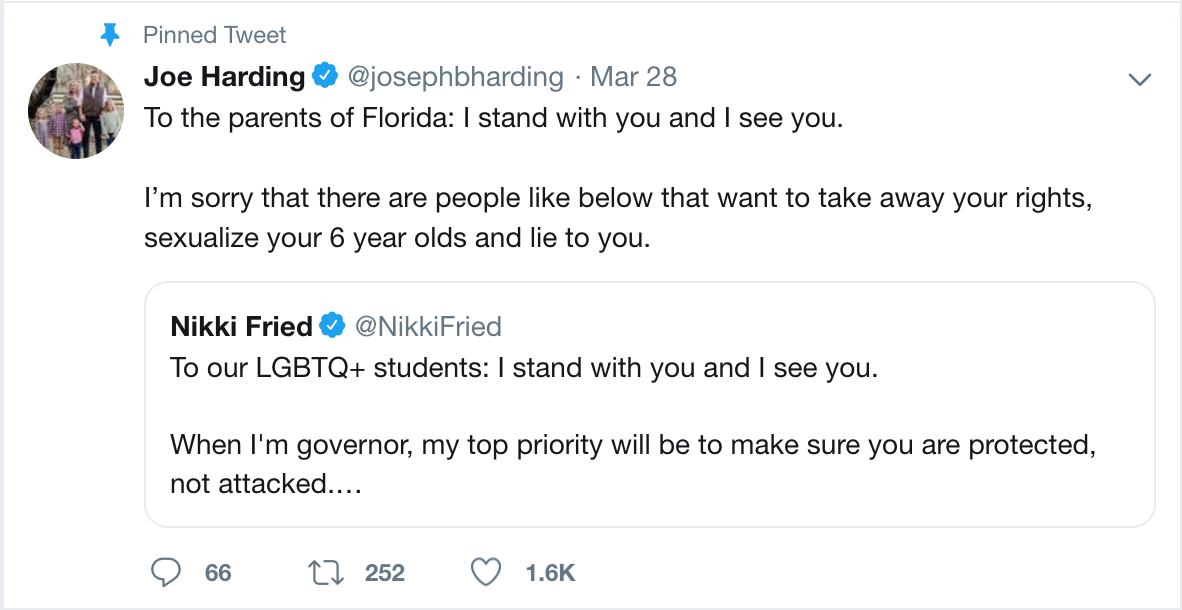 So much for being a professional.

A few months later the Florida lawmaker would be at it again – this time targeting former United States congressman Beto O’Rourke (D-TX), who had criticized Texas Governor – and O’Rourke’s political opponent – Greg Abbott’s (R) support of school vouchers that siphon money away from the public education system to be used on non-public schools.

The case is being prosecuted at the Northern District of Florida’s United States Attorney’s office, with AUSAs David P. Byron and Justin M. Keen taking the lead.

While he may not say the word gay, if there’s any justice, he will be saying guilty.