News Analysis
2 months ago
by Stephanie Bazzle
0
- Advertisement Above -

Kanye West has been removed from Twitter yet again, following his antisemitic (and in fact, pro-Hitler and pro-Nazi) rant Wednesday, despite new twitlord Elon Musk’s promises about banning.

Ye appeared on Alex Jones’ show to talk about his persecution complex, specifically to complain about Donald Trump and his representatives speaking out against West and Nick Fuentes following a dinner they attended at Mar-a-Lago.

Unfortunately, Jones tried to elevate Ye by comparing him (favorably, in case there’s any question) to Hitler, and West responded by going off on a tangent about all the things he loves about Hitler and Nazis.

It was finally a bridge too far for many, with even House Republicans deciding to pull back some of their recent vocal support for the man who’s said he’ll challenge Trump for the 2024 Presidential nomination.

It may have been one straw too many for Twitter, too.

Ye returned to Twitter, where he posted an image of a Star of David with a swastika inside it, then shared what appeared to be a screenshot of text messages between himself and Musk, with Musk warning he was going too far.

Before his account was suspended, Ye tweeted out a photo of Musk being sprayed with a water hose, captioning it, “Let’s always remember this as my final tweet,” and adding the hashtag, “#ye24.”

Musk responded to the tweet, saying, “That is fine,” but after Ye’s suspension, he followed up with another tweet, insisting that he didn’t suspend West’s account over hurt feelings:

Just clarifying that his account is being suspended for incitement to violence, not an unflattering pic of me being hosed by Ari.

Frankly, I found those pics to be helpful motivation to lose weight!

A screenshot of Ye’s final tweet and Musk’s response is below. 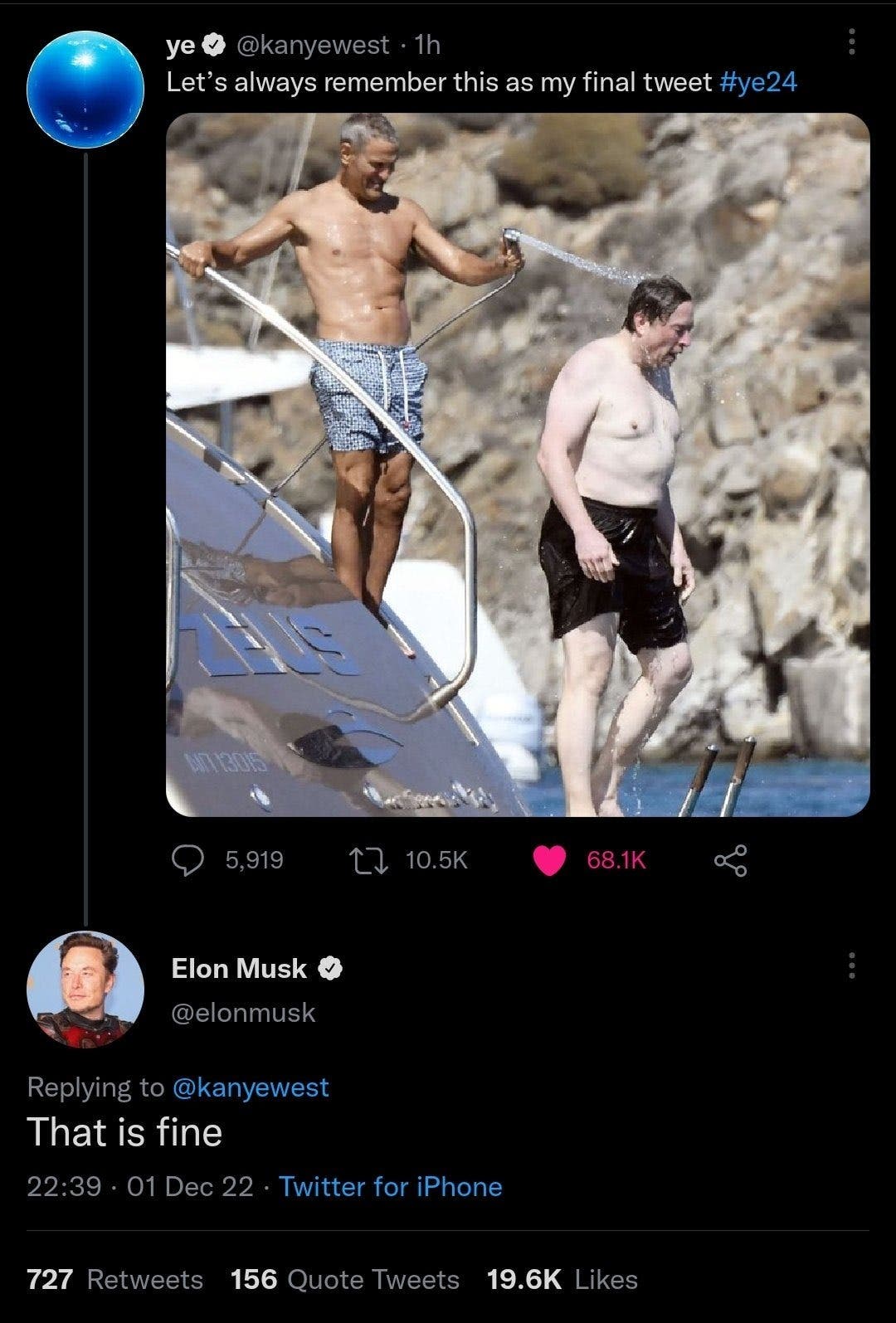 Though Ye’s account is gone, an archived copy shows some of these posts, and other Twitter users saved and shared screenshots showing the text messages he shared.

Kanye just shared a text from moments ago from what appears to be Elon Musk to him saying:

“Sorry, but you have gone too far. This is not love.”

To which Kanye apparently responded:

“Who made you the judge” pic.twitter.com/Ziky3WQYYJ

The warning from Musk was terse, simply reading, “Sorry, but you have gone too far. This is not love.”

Before going on to post a taunting photo, Ye apparently replied, “Who made you the judge?”

HEAR YE: Antisemitic rapper’s attorneys want to break up with him in print