When Elon Musk reinstated Donald Trump’s Twitter account, he probably expected The Former Guy to resume his regular tweetstorms to keep the lights on.

And to his credit, Trump virtually laughed in Musk’s face. 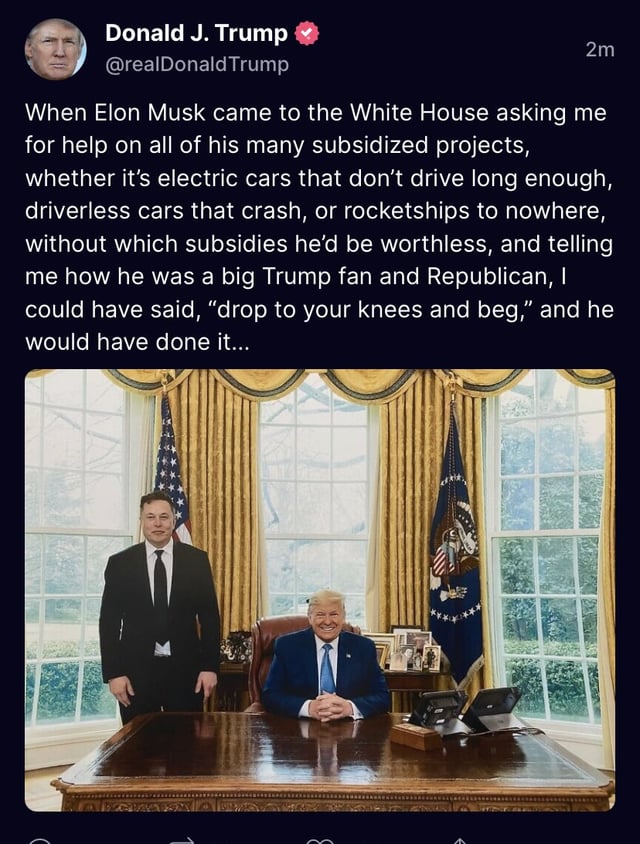 Trump can’t leave TruthSocial to go back to Twitter, silly Elon! That would be like him leaving Melania to go back to Marla. He has to save whatever’s left of his evil molting face while trying to pretend he’s not swimming in lawsuits.

“I don’t see any reason for it,” the Orange McMenace said via video when asked whether he planned to return to Twitter by a panel at the Republican Jewish Coalition’s annual leadership meeting last weekend.

(Also, Republican Jews make as much sense as vegan butchers, and I’ll never understand any of my fellow Tribespeople backing such a hateful loser, but we’re actually here to talk about the other hateful loser.)

So now that Elon’s gotten the message that he can’t use Trump as subhuman clickbait to recoup his idiotic investment, Musk has decided to “own the libs” by openly backing a different Florida Man: Ron “Dead Eyes” DeSantis, who has a record of human rights violations on top of all of his other terrible traits.

If you can take a step back to see the bigger picture, what we have is a classic 3rd-grade standoff here.

Donny doesn’t want to play with Elon, so Elon gets big mad snowflake feels, and so Elon fights back by being friends with Donny’s biggest enemy, Ronny.

All of these small dicks waving at each other would be fine if they kept it on the decrepit Florida playground where they first formed their unholy alliances — because we’re the ones who catch all of the fallout from their petty fights.

But they can’t do that, can they?

The silver lining: some of the absolute worst people are already choosing their fighters, which means a fractured Republican Party which won’t come together behind a candidate for a solid year.

MUHAHAHHAHAA, watch it all burn to the ground while Democrats get stuff done.

Nick Fuentes says the details in the Axios story of his meeting with Trump are accurate. Says he told Trump that he was a hero to him, but thinks he has lost his way and that the person who he most agrees with most now saying all right ‘America First’ things is Ron Desantis. pic.twitter.com/wUAplEOn0u

I wonder how many of the “No” votes on the Elon Musk Twitter poll on whether to reinstate Trump to Twitter were from Ron DeSantis and his camp!?

Ron, I would be worried if Trump decides to get back on here…

Oligarch Elon Musk wants a centrist like DeSantis to be president. I would love to know what Musk's idea of a centrist is. Incidentally, I wonder if Musk was at DeSantis's Nazi rally in Florida earlier this year? pic.twitter.com/OootSxu2ZL

BIGOT FREE: Why do we allow hateful homophobic organizations to ruin our holidays?

PREBUTTAL: GOP butts in as President Biden prepares to give SOTU address

OVERREACH: What’s up with all this American transphobia?