Donald Trump hosted White nationalist and Holocaust denier Nick Fuentes along with antisemitic rapper Kanye West at his Mar-a-Lago estate this week, because of course he did.

The Best Worst People are choosing their Florida Man Fighters for 2024, and the fracturing within the MAGA faction of the Republican Party is the stuff of pure schadenfreude.

Sometimes you can just let terrible people destroy themselves instead of letting their terrible destroy you and everything else, you know. 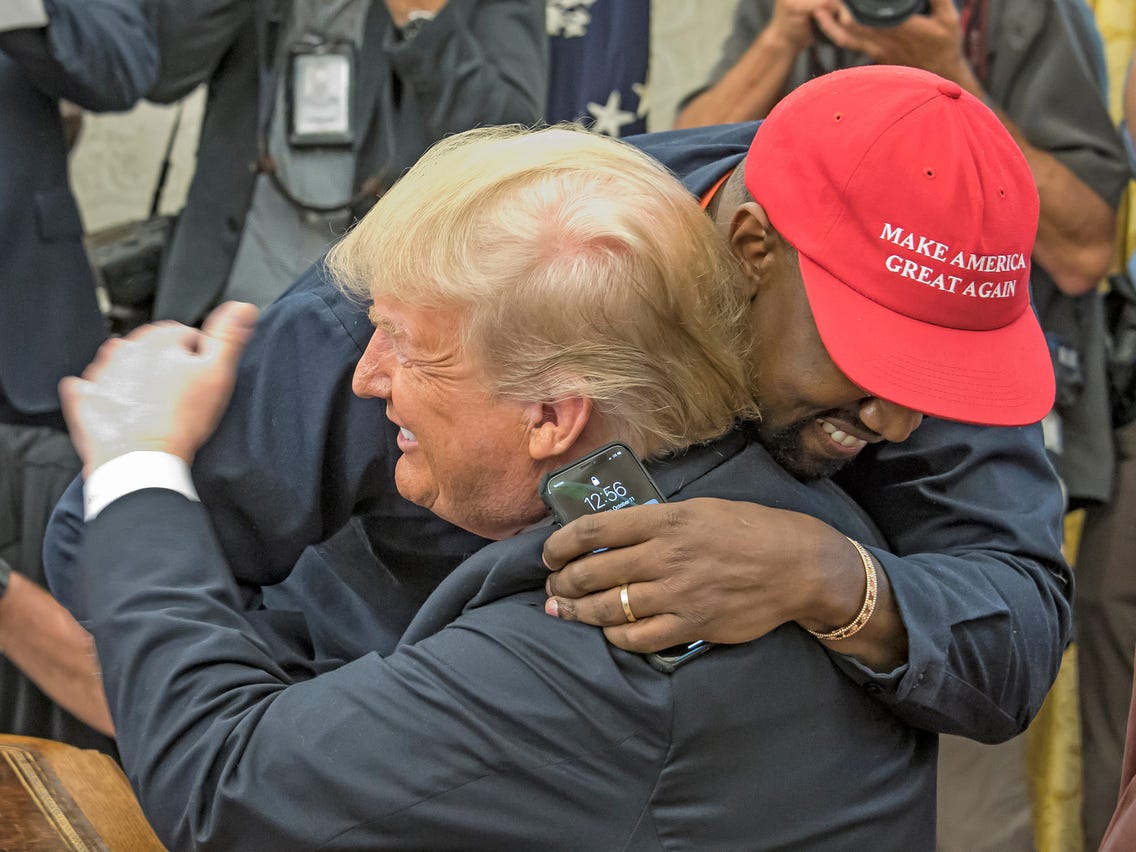 Trump is a racist germaphobe who hates to be touched by non-famous Black people, pass it on.

I’m not at all surprised by the Red Hat Hadj to the MAGA MeKKKa, because Trump has been openly dementia-leaning into the support from the absolute bottom of society his entire life.

But that’s the problem: not being surprised by White supremacists (which is just saying “Nazi” with two words instead of one) and famous antisemites mingling at MAGA-Lago means everyone has accepted Trump’s Terrible as his default setting.

It’s the Trump brand, which he’s sold and franchised to the willfully obtuse poorly educated who blindly follow him.

I honestly can’t begin to imagine what has broken inside of Kanye West, but I’d love to sit down with him and explain a whole lot of things, starting with: THE JEWS DON’T CONTROL THE BANKS OR HOLLYWOOD OR ANYTHING ELSE and I’m living proof of this because I still don’t have a book or movie deal or a bank account with more digits than any famous rappers.

As far as Paid Bad Actor NicKKK Fuentes goes, I’m 100% positive I would have him in a fetal position after about five minutes alone in a room, because his public displays of hate speech against Jewish people are just so outlandish and over-the-top, so badly performed, that it seems just a little too theatrical to be completely real.

Also, loyalties are going to keep shifting based on opportunities when it comes to all three of these obvious grifters who’ve learned that hate and fear far outsell the basic and not very scary truth about things.

Elon Musk has already publicly declared he’s backing Ron DeSantis in 2024 because Trump turned down his offer to return to Twitter.

It’s already starting: Fuentes jumped on the Musk train soon after the MAGA-Lago meeting, I wonder why.

Nick Fuentes says the details in the Axios story of his meeting with Trump are accurate. Says he told Trump that he was a hero to him, but thinks he has lost his way and that the person who he most agrees with most now saying all right ‘America First’ things is Ron Desantis. pic.twitter.com/wUAplEOn0u

And West is spilling some secrets as well.

On Thursday, Ye tweeted a video he called a “Mar-A-Lago Debrief,”  saying that he and Fuentes met with Trump, who apparently screamed at both of them when it was suggested that Kanye might run against him instead of supporting him.

Trump flat-out told Ye he’d lose if he were to run in 2024, and that apparently was worse than the Jews controlling him through our special space laser powers or whatever in the Marjorie Taylor Greene crap he believes on any given day.

“When Trump started basically screaming at me at the table telling me I was going to lose, I mean has that ever worked for anyone in history?” Ye says in the video.

The clip was one of several videos posted by the rapper on Thursday with the slogan “YE24.”

This Jew can’t stress this enough: please keep shining a light on antisemitism and all other hate speech.

It has no place on Twitter, in our politics, or anywhere else on the planet. Hate speech isn’t supposed to be entertainment.

RACIAL JUSTICE: These two get what they deserve after trying to shoot Fed Ex driver

OVERREACH: What’s up with all this American transphobia?

POLITICAL PERSECUTION: Florida vet stood his ground but was charged with attempted murder