Video has surfaced showing the son of Oklahoma Republican Governor Kevin Stitt getting a police escort home despite reeking of alcohol, being underage, and in possession of a case of weapons and ammunition, prompting cries of “special treatment.”

“Can I be honest, my dad is the governor,” Stitt said as he approached the officers. An officer can be heard saying, “I don’t care.”

Watch the video below.

Police were called to Guthrie Haunts after a cache of weapons was found in the parking lot, containing two rifles, two pistols, multiple magazines, and ammunition.

Stitt admitted the guns were his, saying he went hunting earlier that day.

The black Dodge Ram pickup Stitt was riding in was reportedly littered with empty cans of booze, and a 30-pack of Natural Light was in the truck.

“While speaking to the male, I could smell the odor of alcoholic beverages emitting from his person, his speech was slurred and his pupils were dilated,” Long wrote in the incident report.

I then took the male to the side as a crowd had formed and asked him if he was under the influence of any narcotics, or alcohol, and he denied being so. He later advised me that he was intoxicated on alcohol. He then advised me that he was the Governor’s son. I then asked him if any of the firearms belonged to the governor, and he advised that one pistol belonged to him.

Copy of the report courtesy of NonDoc.com 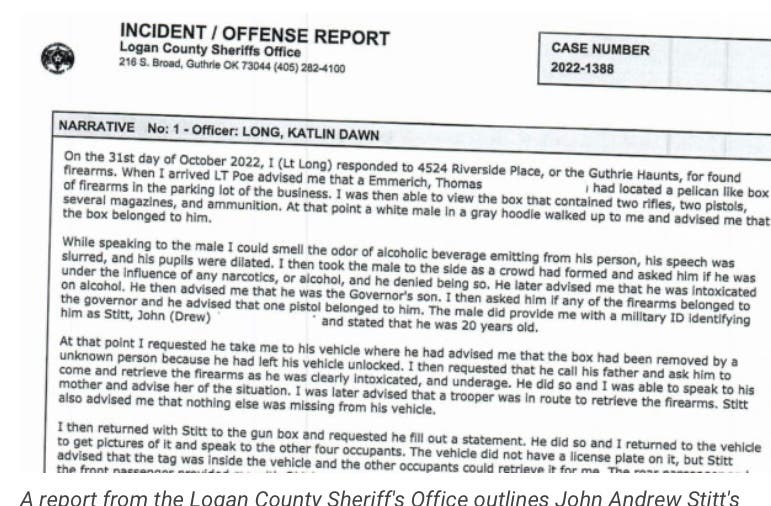 Deputy Long instructed Stitt to call his parents to retrieve the guns but instead, Oklahoma State Police arrived at the scene.

“Your son is intoxicated. Is there any way you can come pick up those firearms?” Long asked Stitt’s mother Sarah on the phone, to which Mrs. Stitt replied, “I’ll just send a trooper,” according to The Oklahoman.

The National Guardsman told Deputy Long that the box of guns had been taken out of his unlocked truck by an unknown person.

There were four others on the scene, none of whom were arrested.

After one of the passengers was determined to be sober, OHP allowed him to drive himself and Stitt home while being followed by a trooper.

“This isn’t ok,” the deputy said. “You know what safety concerns I have right now?”

“I’m pretty upset right now. He was trying to say he wasn’t intoxicated, but I could tell from his pupils that he is really intoxicated. I could smell him and he is slurring his words,” the officer later said.

While the governor’s son was allowed to leave the scene, local prosecutors declined to follow the sheriff’s office’s recommendation that Stitt is charged with possession of an intoxicating beverage while under the age of 21.

Though Sheriff Damien Devereaux dismisses claims of “special treatment,” he did question the fact that the suspect hadn’t been formally charged.

People are talking about this being swept under the rug, but we did a fully detailed report that day and submitted an affidavit to the district attorney’s office for charges,” Devereaux told The Oklahoman.

“That doesn’t surprise me when there isn’t a prior record. That’s typical,” the Sheriff said when told about the District Attorney’s deferred prosecution offer.

Open containers, the smell of alcohol permeating the vehicle, underage drinking, and guns – yet no one was arrested.

There are no reports of field sobriety tests or breathalyzers being given, which seems customary in this type of situation.

“I’ve never run into anything like this,” Deputy Long says in the video.

Stitt hasn’t responded to the District Attorney’s offer as of this reporting.

I’d like to live in a world where our young Black men are afforded this kind of treatment & benefit of the doubt when pulled over by cops for a broken taillight!

Gov Stitt’s son was intoxicated & in possession of a cache of guns. No consequences. He got an escort home though. pic.twitter.com/7l8PPxLAbw

Original reporting by Ben Felder at The Oklahoman.

BIGOT FREE: Why do we allow hateful homophobic organizations to ruin our holidays?

HYPOCRISY AND HOOKERS: Why Marco Rubio was forced to pull two TV ads

ETHICS BOARD: SD Gov. Kristi Noem may have “engaged in misconduct”