The gunman who opened fire inside of a Colorado gay club Saturday night, killing five and injuring 25 others, was not only previously arrested for threatening to bomb a neighborhood last year, but is the grandson of California State Assemblyman Randy Voepel – a Trump-supporting MAGAt who compared the Jan. 6th insurrection to the Revolutionary War.

Mere days after the violent attack on the Capitol, the former Santee mayor wrote on social media, “This is Lexington and Concord. First shots fired against tyranny,” adding  “Tyranny will follow in the aftermath of the Biden swear-in on January 20th.” 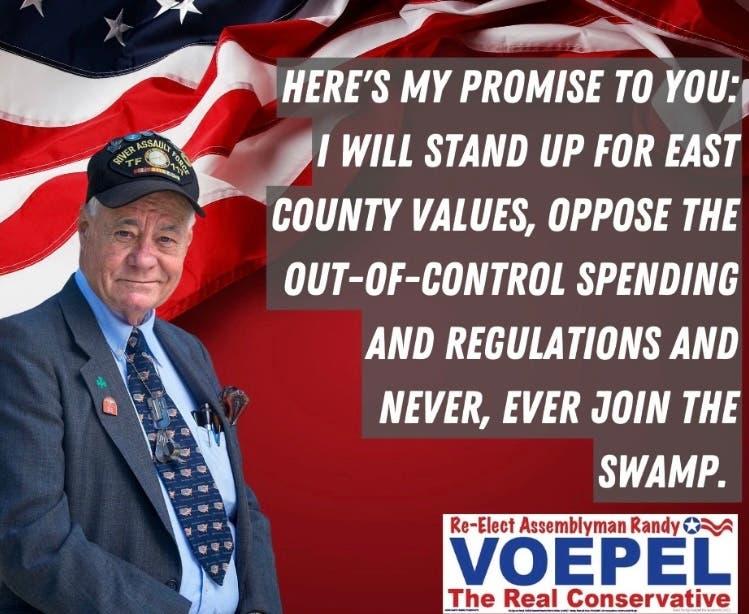 22-year-old Anderson Lee Aldrich was charged with two counts of felony menacing and three counts of first-degree kidnapping after calling a bomb threat to a local neighborhood and refusing to cooperate with officers in June of 2021 – claiming to be armed with multiple weapons, ammunition, and a bomb. Despite being charged with six felonies, the case was never prosecuted.

A Tactical Support Unit, which includes the Regional Explosives Unit was called in. Around 10 homes were evacuated in the surrounding area, while an emergency text notification was sent out to homes within a 1/4-mile radius of the address,” according to KRDO.

Read the press release below. 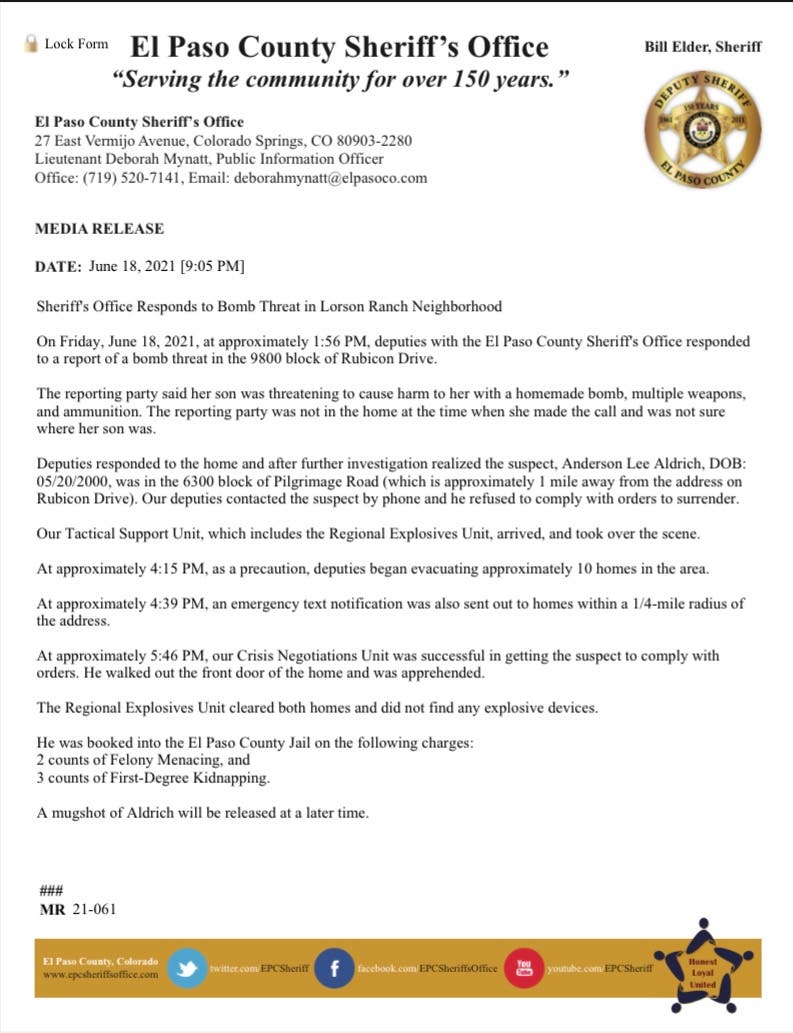 No explosives were found.

Shortly before midnight on Friday, Aldrich entered Colorado Springs’ Club Q – one of only two gay bars in the city – killing almost half a dozen patrons and hitting more than two dozen others, before two unarmed customers stopped the attack.

Police Chief Adrian Vasquez, said two firearms were found at the scene, including an AR-15 style “long rifle. “At least two heroic people” confronted the gunman and stopped the shooting, Vasquez said, adding: “We owe them a great debt of thanks,” The Associated Press reported.

Trigger-happy Congresswoman Lauren Boebert (R-CO), who doesn’t seem to care enough to change her stance on common-sense gun regulations, received instant backlash after tweeting her less than a sincere condemnation of Saturday night’s shooting at a Colorado Springs gay nightclub.

The news out of Colorado Springs is absolutely awful.

This morning the victims & their families are in my prayers.

This lawless violence needs to end and end quickly.

But the public isn’t buying the crocodile tears of the unwavering second amendment propagandist, who has unapologetically refused to entertain any idea of gun control. Boebert has also been vocal in pushing anti-LGBTQ rhetoric, which some believe contributed to violent attacks like these on members of the community.

You encouraged this. You are the hate that leads to violence. pic.twitter.com/aZnBg3KBVw

Justice Department spokesman Anthony Coley said that Attorney General Merrick Garland has been briefed on what some are calling a “hate crime,” and said the FBI is assisting local law enforcement.

Colorado Governor Jared Polis – the first openly gay man in the country to be elected governor — called the news “sickening.”

“My heart breaks for the family and friends of those lost, injured, and traumatized in this horrific shooting,” Polis said. “Colorado stands with our LGBTQ community and everyone impacted by this tragedy as we mourn.”

Increasingly derogatory and inflammatory rhetoric has been directed toward the LGBTQ community in recent months, leading to a rise in violent attacks, after right-wing bigots falsely pushed the dangerous narrative that drag queens and members of the transgender community are “grooming” and indoctrinating children.

Though a motive hasn’t been revealed, Club Q hosts a Drag Diva Drag Show on Saturdays and an all-ages brunch on Sundays. The nightclub held a drag show just hours before the attack, Heavy reported.

The CEO of Lambda Legal – a prominent LGBTQ rights organization – Kevin Jennings, called for stricter gun laws, condemning the ease of access and the adverse effects on marginalized communities.

America’s toxic mix of bigotry and absurdly easy access o firearms means that such events are all too common and LGBTQ+ people, BIPOC communities, the Jewish community, and other vulnerable populations pay the price again and again for our political leadership’s failure to act. We must stand together to demand meaningful action before yet another tragedy strikes our nation.

On the nightclub’s Facebook Page, Club referred to the attack as a hate crime.

“Club Q is devastated by the senseless attack on our community,” they wrote. “We thank the quick reactions of heroic customers that subdued the gunman and ended this hate attack.

Performer Del Lusional expressed disbelief. “I never thought this would happen to me and my bar,” she tweeted. “I don’t know what to do with myself. I can’t stop hearing the shots.

I never thought this would happen to me and my bar.
I don’t know what to do with myself. I can’t stop hearing the shots.#clubq

Mr. Aldrich remains in custody. Investigators are determining if prosecution of the shooting falls under hate crime guidelines. The police department hasn’t disclosed why the 2021 arrest was sealed.

This is a developing story.

Original reporting by Thomas Peipert and Jesse Bedayn at The Associated Press.

OP-ED: Democracy has been saved temporarily as extremists continue plans to destroy it

JACKED UP: Pundits ponder the necessity of a Special Counsel