As the fallout from the artist formerly known as Kanye West’s antisemitic rantings continues, it’s been reported that a Jewish cemetery was desecrated with antisemitic vandalism over the weekend.

Nearly 40 headstones were covered in giant red swastikas, and others in red paint, at the Congregation Am Echod Jewish Cemetery in Waukegan, Illinois.

Located outside of Ye’s hometown of Chicago, one of the headstones was defaced with the phrase “Kanye was rite.”

The vandalism was discovered early Monday morning, according to Chicago’s Fox 32, sparking swift and immediate condemnation from members of the Jewish community.

“The desecration of graves is as low as it gets, and by the way, it’s also as cowardly as it gets,” said David Goldenberg, regional director of Anti-Defamation League Midwest. “Let’s be clear, they should illicit a visceral reaction. It is hateful, anti-Semitic and they’re dangerous because they can cause these types of real-life acts.” 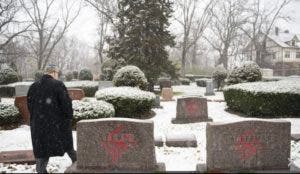 “In this particular case, it was vandalism, the next one could be assault. People could get hurt,” Goldenberg said.

Watch a video of the damage below.

Waukegan Mayor Ann Taylor released a statement on the egregious act, saying “I am deeply disturbed and angered by the hateful imagery found spray-painted on headstones this morning,” adding, “Hate does not have a home in Waukegan; when such incidents occur, our marginalized neighbors are victimized, and our entire community suffers.”

Resident Larry Yellen, who grew up in the city and whose parents are buried at Am Echod, told Fox 32,“I think they need to know a little bit about the people that they have attacked in such degrading form.”

“I am shocked and appalled by the defacement of the Am Echod Jewish Cemetery in Waukegan. This act of hate is truly despicable, United States House member Brad Schneider (D) of Illinois’ 10th district, told reporters. “I join with other leaders and organizations such as Mayor Ann Taylor and the ADL in condemning this attack. Hate has no home here. Antisemitism must neither be normalized nor accepted.”

This act of hate comes after freeways in Los Angeles and Jacksonville, FL were draped with banners displaying anti-Jewish content.

Recently, at an annual college football game between longtime rivals, the University of Florida, and the University of Georgia, at a stadium in Jacksonville, “Kanye was right about the Jews,” was broadcast onto the field.

The ACLU reported that over the past five years, anti-Jewish hate crime has increased 400%.

Over one hundred years old, Am Echod is the final resting place for many a part of Waukegan’s Jewish community, including Alan Friedman, whose parents’ graves were fortunately untouched – but it was no less devastating.

“He’s got to be in a lot of pain. I feel sorry for him, or them, for having this much hate in their heart,” Friedman said.

“There’s a lot of anger, a little bit of worry but mostly feeling sorry for how dark that person’s heart has to be to do that,” he told The Chicago Sun-Times.

A former investigative reporter, Yellen told the Sun-Times, “So you’ve got a truly American family, a religious family, Jews who believed in the freedoms that the United States supposedly guarantees and protects, and you find swastikas from neo-Nazis on their headstones, very shocking.”

The Waukegan Police Department asks anyone with information about the crime to call its tipline.

DRY LAKE: Before she went to Mar a Lago, Kari Lake had about eleven cultists protesting her loss