Opportunistic Arizona liar Kari Lake knew her chances of beating Katie Hobbs to be Arizona’s next Governor were getting slimmer and slimmer, so she began spouting the Big Lies and shouting all the MAGA trigger words (“rigged!” “fake!”) before the race was finally called for Hobbs.

And then she turned her MAGA propaganda efforts up to eleven, which, coincidentally, is just about the number of supporters who showed up to protest her loss. 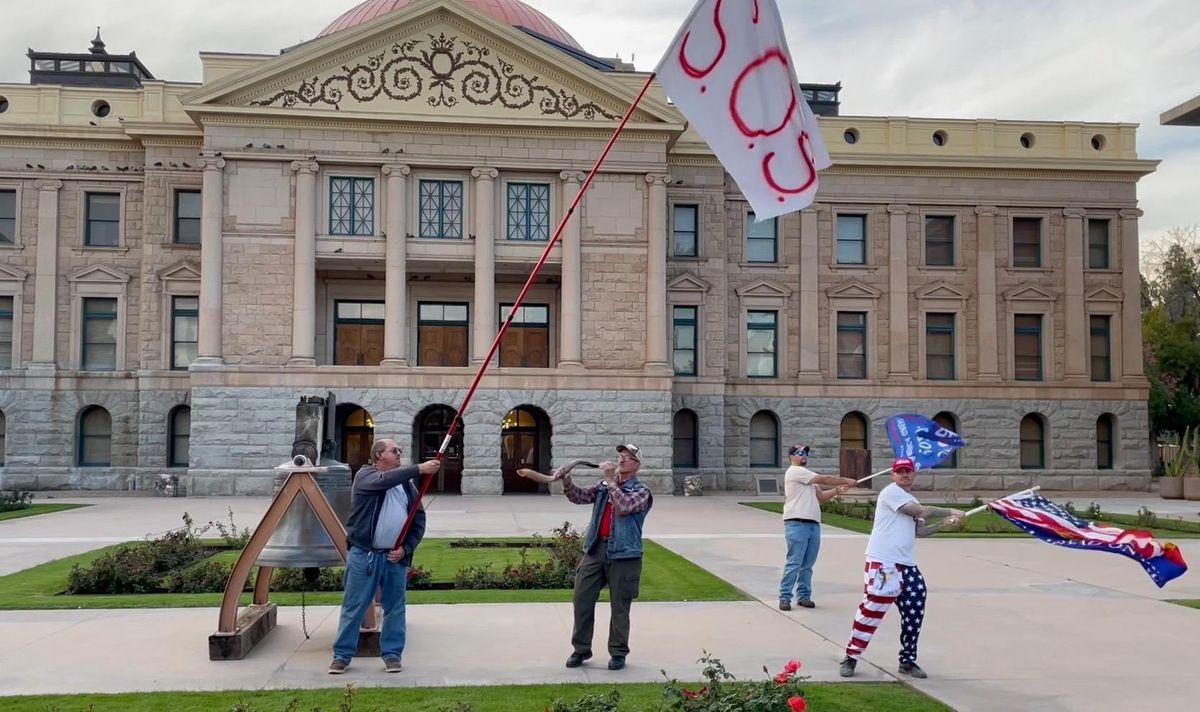 Approximately 15 people gathered at the Arizona state capitol on Tuesday, with some waving flags emblazoned with pro-Trump messages and “SOS.” My response: “LOL.”

Just look at these MAGA mooks: Maybe these were all of the Paid Bad Actors KKKari could afford to pay to show up for a stunt to make it look like she had any real support? I’d ask her myself, but: For a group that’s so obsessed with crowd size, it’ll be basically impossible to spin this.

🎵 “And I can tell you,
Support for Kari Lake won’t be strong
After the Proud Boys of Summer have gone.” 🎵

And speaking of musical references, it looks like KKKari might get sued by Tom Petty’s estate for using “I Won’t Back Down” without permission.

The late Petty would’ve aggressively hated Kari Lake, so this recent development has been a nice extra injection into my life’s blood.

Typical of "Lawless" Lake and her deeply unpatriotic supporters.

KKKari LaKKKe is what happens when the media coddles a madman, full stop.

If Trump doesn’t choose her as his running mate over Marjorie Nazi Greene, then there’s every hope this particular MAGA Mean Girl will just take her Vaseline-smeared camera lenses to Newsmax where we can all forget about her.

And about that potential vice presidency, guess where KKKari LaKKKe was Thursday night?

THE FUROR: Racist right winger's take on the Arizona election is woefully wrong

IN DENIAL: This Arizona Republican just lost his election and, shocker, refuses to admit defeat

KIBOSHED: Even Republicans think this guy is going to fail as Majority Leader