“Florida Man Makes Announcement!” blared The New York Post on Wednesday, burying its sidebar on page 26 (maybe an extra intentional slight, considering that he used to dominate Page Six?) about the mishegoss at Mar-a-Lago Tuesday night where Donald Trump gave an even worse campaign announcement than he did in 2016.

Trump hobbled up a small set of crickety metal steps to a stage inside a Florida ballroom (where he probably served all the leftovers from Tiffany’s wedding) instead of descending a gold escalator. He droned on about whatever he said.

I didn’t watch because the sound of his voice makes my entire body shut down.

Here’s the thing: he thinks running is going to protect him from prosecution, because what consequences has he ever seen?

Except this time, the DOJ isn’t having any of his usual bloviating. They’re not going to stop investigating him.

You can exhale a little bit, Dear Reader, because Trump’s strategy is based on his own delusions,

For anyone who needs to hear this — trump announcing he is running for President does not have a legal impact on investigations. No one at DOJ watched that speech and ripped up all of the work they have been pursuing

The Justice Department is pushing ahead with its probes into all of his crimings. And with the midterm elections now mostly complete and the 2024 presidential campaign months away from really beginning, federal prosecutors have plenty of time to continue their work even as Trump hits the campaign trail. HA HA HA.

A crowd has formed by the exit of the ballroom as some try to leave Trump’s announcement speech before he has finished…. But security won’t let them. pic.twitter.com/O7C6QJfYgK

Sidebar: why was he allowed to file at all?

Shouldn’t the FEC have stricter rules about who can run based on how many federal investigations and civil trials they have going on at the same time?

Personally, the last thing my psyche needs is another two years of a Trump presidential campaign, so I’m thinking maybe some answers to these questions might help me sleep without the help of melatonin someday. 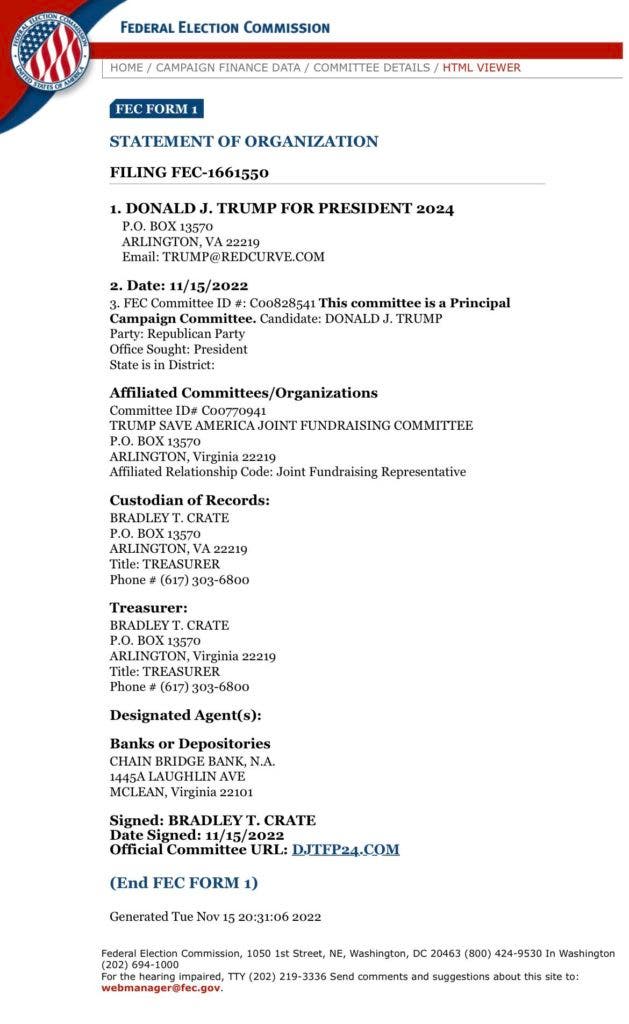 I did a little investigative journalism on Wednesday morning regarding the above, including calling that (202) 694-1000 number as well as the phone number provided for “Red Curve,” which sounds like what it’s called when you don’t get a Red Wave.

“Red Crave” asks you to “Press 1 for credit issues” (?) when you call a MA area code for a campaign based in VA & I left a VM for “Bradley Crate” 😂 https://t.co/qFOMlAPdJo

I still think Bradley Crate is somehow related to John Barron, especially since no one got back to me by press time.

Trump is putting the nail in the coffin of the Republican Party.

Is he going bury it at Bedminster or Mar-lago? pic.twitter.com/PDn1sobGuc

But ANYWAY, not only will the RNC not pay for Trump’s legal bills, his legal troubles will only keep mounting, and he’ll likely be too busy giving depositions to stay on the campaign trail.

Also, with this kind of “support,” maybe he literally did this to duck prosecution and now that he’s failed, he might have to drop out.

Because when has Trump ever paid for anything out of his own pocket? It might come down to which he cares about more: having his ego stroked at campaign rallies, or making sure there’s enough scratch to fund his legal schemes until the end of his miserable life? Let’s watch!