News Analysis
2 weeks ago
by Tara Dublin
0
- Advertisement Above -

Tiffany Trump’s poorly timed wedding at Mar-a-Lago on Saturday provided endless internet fodder over the weekend and well into Monday, mainly thanks to all of the leaked photos — some from her half-sister, Ivanka.

Aside from dodging Hurricane Nicole, the happy occasion was marred by Senate Democrats clinching their majority probably just as Tiffany’s father was shuffling across the dance floor with his thumb in its frozen “up” position.

Weddings traditionally bring out both the best and worst in people, and in this case, it brought out the best thing I’ve ever seen from one of the worst people ever. There’s Kim “Kimmy Golddigger” Guilfoyle all the way on the right doing that “HEY WAIT” last-minute pose. She probably got too much cocaine on the part of the invitation that said “Easter Formal Dress” and showed up cosplaying as Maleficent.

While she’s clearly a Winter, she could absolutely pull off one of the accepted colors, or at least come wrapped in the foil from all of the Hershey’s kisses stolen from children, like Lara Trump did.

Also, why doesn’t Lara have hands? Why do none of these allegedly rich people have any style? TACCCCKKKY.

This is Tiffany Trump’s satanic sex wedding. For real. . pic.twitter.com/xaZ7YZVdS6

But that’s not the story. The story is Ivanka took one look at that “family photo” and was all, “Bye bish!” when it came to her brother Don’s fiancée/dealer. 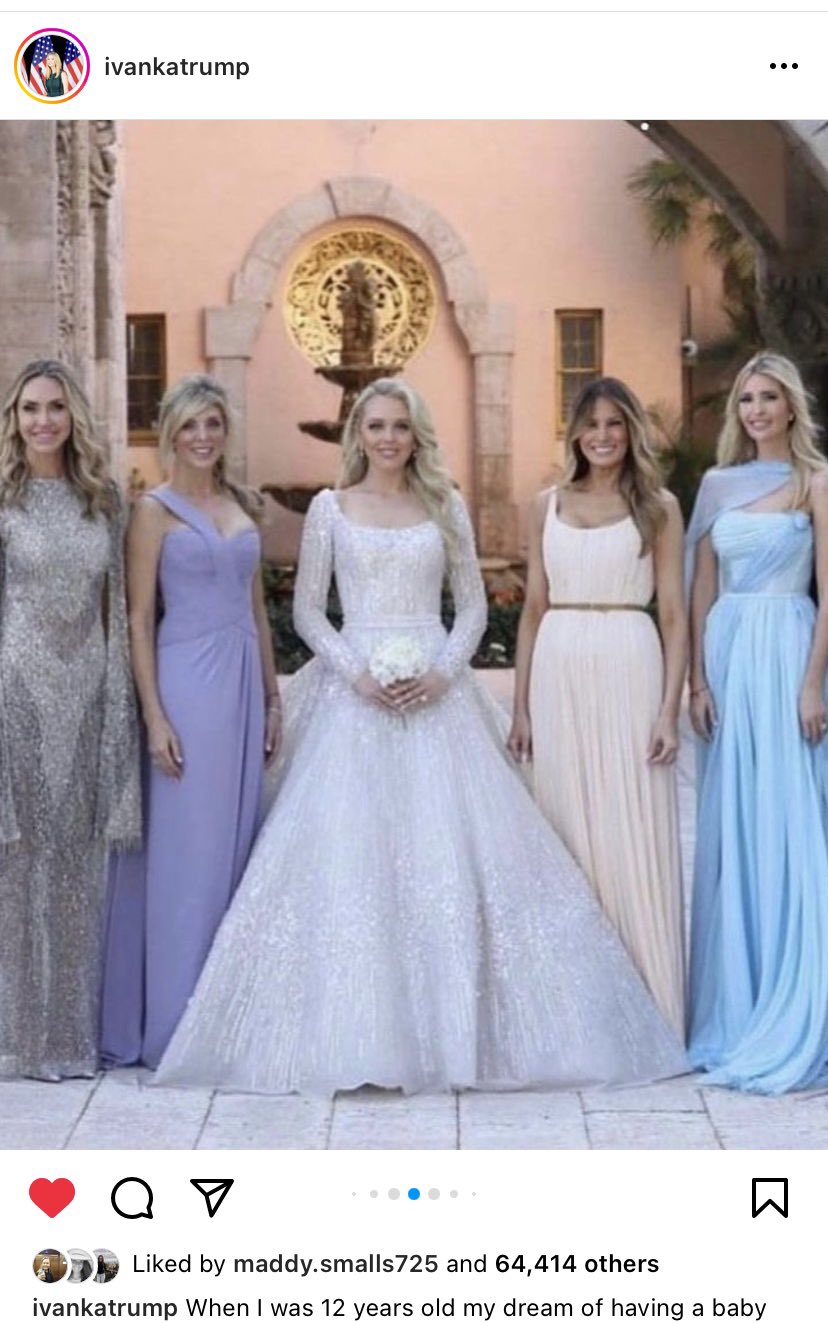 I mean, that’s ice cold and right on-brand for Vanky, who has always had a rep for being the female version of her father but who manages to publicly behave in a slightly less obnoxious way.

She might claim it was a “terrible mistake” (suuuure honey) but we know tensions were so high at Tiff’s to-do, Trump was completely miserable and everyone was faking it for Tiffany’s sake.

Something tells me tomorrow’s post-wedding brunch at Mar-a-Lago isn’t going to be too cheery either #DemocraticSenateMajority pic.twitter.com/gQwz3vhhlj

Twitter really tore into the Preferred Trump Daughter, and it was sweeter than the wedding cake Trump probably ordered from McDonald’s.

After using scissors to remove any evidence that Kimberly Guilfoyle was even there, Ivanka Trump finished scrapbooking Tiffany's wedding. pic.twitter.com/1ROLNmD22G

Ivanka Trump crops Don Trump Jr’s girlfriend out of the family photo before posting. Don’t ever forget it @kimguilfoyle

Yes, Tiffany looked pretty, as all brides do. She just happens to have terrible taste in decorating. I mean, how many Hobby Lobby stores are now completely out of Kleenex and RIT dye? Look at this cheap crap. But still, at least Ivanka got Kimmy Golddigger out of the picture, if only metaphorically. For now.

But I don’t want to like something Ivanka did 😏 @kimguilfoyle https://t.co/cpK9qxX86o

REVOLTING REPUBLICANS: What Matt Gaetz said he'd rather do than support McCarthy

NO LIMITS: FEC asked to investigate this staggering, shady transfer Trump just made