Donald Trump has completely lost the backing of one of his most generous benefactors, Rupert Murdoch, and it’s been a long time coming. Aside from the scorching front pages of his various fishwraps, Murdoch is clearly sending a message to Trump through the teevee via Fox News: BYE, ORANGE FELICIA!

Maybe he should hold off on that “announcement” like everyone around him has been telling him. 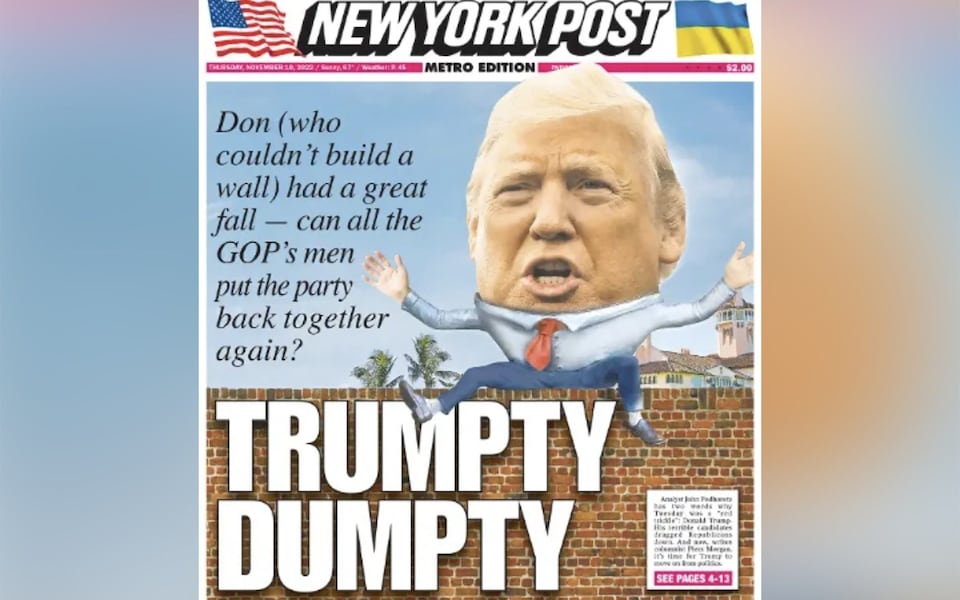 On her show “The Faulkner Focus” (which sounds like it’s an advanced literature course at a small college in a sleepy Southern town, but sadly isn’t), Fox News host Harris Faulkner gave her take on who might be the best GOP candidate to run against President Joe Biden in 2024, and while she came up with a list — let’s call it “The Unlucky 13” — somebody’s name was conspicuously absent.

interesting — Harris Faulker on her Fox News show showed a graphic of 13 potential Republican presidential candidates and Trump wasn't among them pic.twitter.com/wdhF4OSSZY

I don’t ever want to agree with someone on Fox News, but Harris Faulkner isn’t wrong to leave Trump off that list. Running a dead potted plant would be a more effective strategy for the GOP.

And pretty much everyone knows this, including the Orange McMenace himself. He knows he’s over, but he can’t let on that he knows. How he manages to breathe through that thick smokescreen is beyond me.

Rep. Matt Gaetz, one of the very few GOP lawmakers who had planned to go down to Mar-a-Lago tonight for Trump’s announcement, says the weather is not looking good for his flight down from D.C. to Florida. But he will be there “in spirit.”

Now, I’m writing this before Trump’s “big announcement” on Tuesday, and it hasn’t yet been a full 24 hours since the January 6th House Select Committee tweeted about him not showing up to testify, so it’s all kinds of weirdness going on right now. It’s also possible Trump is hoping Putin will take care of this and all of the other bad things happening to him by starting World War III instead.

There sure is a whole lot of “how can we miss you if you won’t go away” energy with the MAGA Republicans right now. Not only does nobody want Donny to run again, but they also don’t want Ronna Romney McDaniel to keep her gig. Weird how none of them can take a hint.

THE NO POT PARTY: Republicans take a hit at marijuana legalization

WEIGHED DOWN: Wait 'til you hear what Chris Christie just said about Trump!