On Friday, tweeting a clip of Masters on Fox News‘s Tucker Carlson Tonight, where the defeated Republican candidate said, “McConnell decided to spend millions of dollars attacking a fellow Republican in Alaska instead of helping me defeat Mark Kelly. Had he chosen to spend money in Arizona, this race would be over.”

💯💯💯Well said!!!@bgmasters: "McConnell decided to spend millions of dollars attacking a fellow Republican in Alaska instead of helping me defeat Mark Kelly. Had he chosen to spend money in Arizona, this race would be over."
pic.twitter.com/ssaXDx2iwp 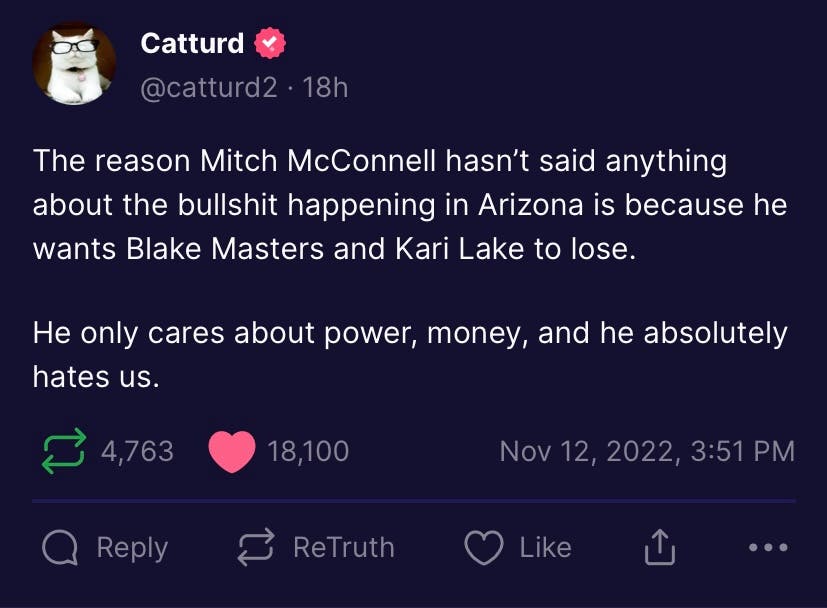 The Senate Minority Leader has attempted to distance himself from the Trumpiest of candidates, including putting a high-pressure campaign on Arizona Governor Doug Ducey to run against Senator Mark Kelly (D-AZ) – which didn’t make Trump very happy.

“Rumors are that Doug Ducey, the weak RINO Governor from Arizona, is being pushed by Old Crow Mitch McConnell to run for the U.S. Senate,” Trump said in a January statement. “He will never have my endorsement or the support of MAGA nation!”

In conversations with senators and would-be senators, Mr. McConnell is blunt about the damage he believes Mr. Trump has done to the GOP, according to those who have spoken to him. Privately, he has declared he won’t let unelectable “goofballs” win Republican primaries.

An establishment Republican, Mitch McConnell has been in the United States Senate for three decades. Though he remained quiet during most of Trump’s presidency – packing the courts and giving tax cuts to the rich – the lawmaker from Kentucky expressed concern about 2022’s “candidate quality.”

His feelings about ultra-MAGA weren’t a secret, and Masters himself was well aware.

“I certainly think we need new leadership,” said Masters when asked about McConnell, before going on to declare that McConnell “will not own me, McConnell doesn’t love me. And clearly, he had a chance to help. He didn’t do it,” according to National Review.

“He doesn’t want me in there, but he’s about to be stuck with me,” continued Masters.

“A few months ago, he was insisting that he was ‘a much better candidate than Mitch McConnell gives me credit for’ (he was trailing Kelly by more than ten points at the time) while publicly imploring McConnell to invest money in his race. A couple of months before that, Masters said McConnell was ‘not good’ at ‘legislating’ and expressed his preference that McConnell be replaced as leader,” National Review wrote.

Whether or not Sen. Mitch McConnell “wanted,” Masters and Lake to lose their races – we may never know. But what is certain is that McConnell is no fool. \

And I have a sneaking suspicion he’s playing a long game.

The Arizona Governor’s race has yet to be called. The Democratic nominee, and current Secretary of State Katie Hobbs, has a slight lead.

DEFUSED: Here's Elizabeth Warren's plan to prevent GOP from blowing up the economy

DIRTY MONEY: Don’t rich Republicans have better things to do with their cash than this?