If a Democratic Senate candidate like Tim Ryan from Ohio can win over a Fox News Town Hall audience with one answer to a question, imagine what he could do for the whole country.

Ryan, currently a U.S. House member, told the crowd in his amiable Midwest moderate tone that he wants to work with Republicans and Democrats. He also received boos when he talked about the violence of January 6th, criticizing his Republican opponent, J.D. Vance for appropriating Donald Trump’s MAGA political movement after openly criticizing Trump for years. 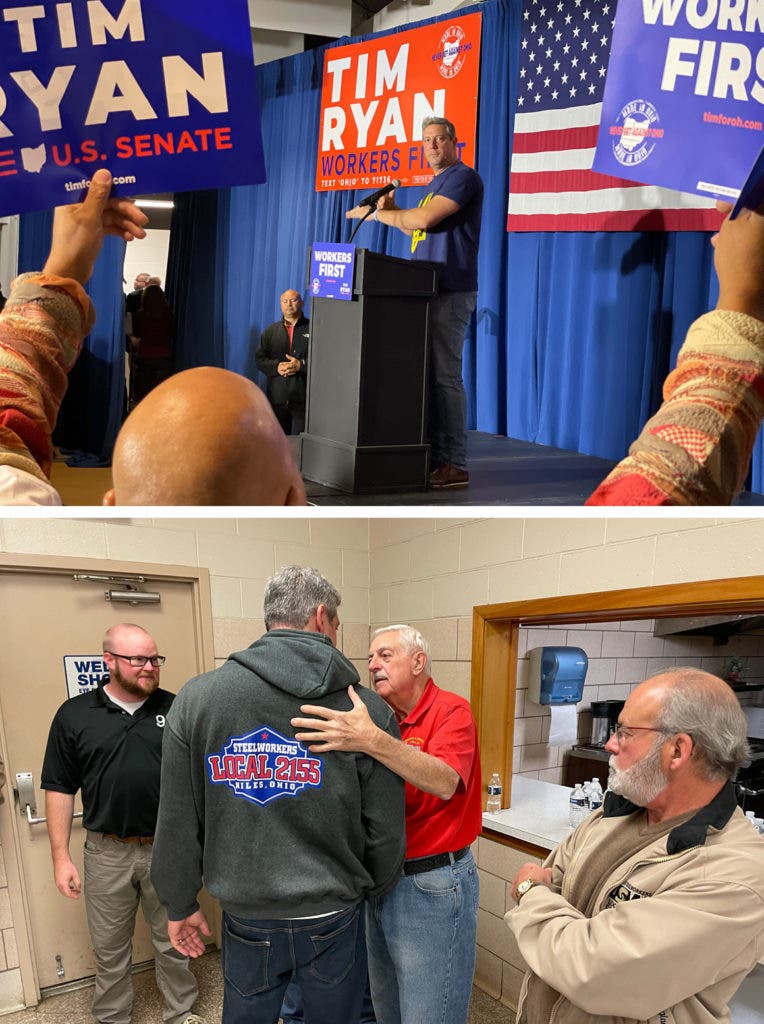 Ryan also blasted Vance for supporting the “MAGA extremism” that may be encouraging violence, such as the recent attack on House Speaker Nancy Pelosi’s husband. “We’ve got to stop the stupid fights,” Ryan said during the divided town hall where the audience took turns cheering on their guy.

JD Vance said a tax cut for workers was a “gimmick,” but defends tax cuts for big corporations?

Maybe that works for your buddies in California, but it’s a bad deal for Ohioans.

Ryan had already owned JD “Hillbilly Effigy” Vance at a debate last month, memorably saying that “Ohio needs an ass-kicker, not an ass-kisser.” Ever since, the insult had become a refrain of his campaign, repeated in TV ads and on T-shirts and wristbands worn by supporters at his events.

Ohio needs an ass kicker, not an ass kisser. Say no to #PuppetVance! https://t.co/FZH9GmxnCG

Fun fact: Politico reports that Dan Fonte, the vice president of the Ohio Alliance for Retired Americans, told Ryan to say “ass-licker” instead but decided to go with the less crude version. Maybe save that slogan for when Jim Jordan runs again, if he’s not in prison.

JD Vance is not Ohio.

Ohio needs an ass-kicker, not an ass-kisser. pic.twitter.com/xUMWxBunQQ

Here’s Tim Ryan winning over a Fox News-watching crowd in Columbus. If you’re an Ohio voter who somehow knew nothing else about Tim Ryan, this tells you everything you need to know.

This clip shows a key lesson of @PersuadersBook.@TimRyan persuades not by changing where he stands but by opening his posture.

He says he’s not afraid and pays them the respect of wanting to stay in relationship.

Meanwhile, Hillbilly Effigy is a lying, opportunistic, grifting smarm factory who’s made a whole lot of shady investments, one of which led to burned monkey balls. Yes, that’s real.

Also, please ignore the polls and remember that the GOP is full of liars who couldn’t last one round on stage with Tim Ryan.

EMBARRASSING: Twitter fact checks Elon Musk for one of his own posts

CHASTENED: Husband of Pete Buttigieg shows us how to respond to Tucker Carlson

SECONDHAND NEWS: Murdoch turns on the monster he created

DETHRONED: Murdoch moves on to a new right-wing flavor of the month