The Twitterdust hadn’t even settled from the Oprah-Oz mishegoss before it was announced on Friday morning that MSNBC wouldn’t be renewing “Cross Connection,” the popular opinion-based weekend show hosted by the brilliantly energetic Tiffany Cross.

In other words, they summarily fired her.

Cross is a proven anchor who proved to be the top-rated weekend host. 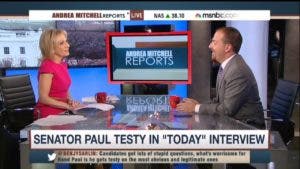 And yet, MSNBC has chosen to keep the unconscionably mediocre Chuck Todd and the unwatchable Andrea Mitchell instead.

The unexpected and abrupt decision from the last liberal-leaning news network we can watch now than CNN is Fox Lite set off the Twitterverse, and Black Twitter in particular.

And unlike most online outrage, this one has soooo much merit.

“SHE did it,” tweeted the sitcom actress Yvette Nicole Brown. “[Rashida Jones, MSNBC’s network president] may have been hired to help MSNBC’s “diversity” issues, but she used her position to fire TWO black women.”

Brown is referring, of course, to the departure of former Hillary Clinton aide and early MSNBC digital host Zerlina Maxwell, whose last program ran in mid-September.

SHE did it. @RJonesNews may have been hired to help @msnbc’s “diversity” issues but she used her position to fire TWO black women.

MSNBC regular Wajahat Ali pointed out that Cross had recently stirred up a tremendous white grievance backlash from the Fox-o-Verse, as well as from Megyn “blackface is my jam” Kelly, formerly of NBC until her Putin-appeasing interview and generally, poor fit doomed her to a well paid, short-lived tenure at the network.

It is hard to ignore the timing of Tiffany Cross pointing out a Teen Vogue story in her last program, which itself is based on a University of Michigan Law Review story, pointing out that affirmative action has disproportionately benefitted white women.

White nationalist Tucker Carlson hits Tiffany Cross recently and accuses her for fueling a "race war." She get deluged with hate and criticism. Now? She's out at MSNBC. Contract not renewed. Timing is terrible. Protect Joy Reid, a unicorn, a Black female anchor on cable news.

The immediate hot take from Twitter will be the enduring one: why this decision that’s going to please almost no one who watches MSNBC on the regular?

Literally every week, Steve Marmel tweets the same thing about Chuck Todd because it can never be wrong.

Andrea Mitchell has had a long and illustrious career in journalism.

But she’s also married to Alan Greenspan, the former Federal Reserve Bank chairman who belatedly learned that bubbles exist and self-regulating companies would kill themselves with greed.

She has often sounded like she’s imparting her own political agenda into her now-excruciating commentaries.

Here’s one of the many examples of her out-of-touch commentary:

This last bit with Andrea Mitchell just made my brain cry pic.twitter.com/KPNjzfVCHQ

So far, MSNBC hasn’t announced what will replace “Cross Connection.”

Tiffany Cross’ program was part of a weekend block that also included shows hosted by the now-departed Zerlina Maxwell and Jonathan Capehart, whose “Sunday Show” is still on the air.

It doesn’t take a political genius to look at the optics of replacing Cross with Psaki, which would be a glaringly terrible look for the supposedly liberal network, one that prides itself on on-air diversity.

MSNBC has a deep bench of great and diverse female talent, including Symone Sanders and Katie Phang, and it’s possible either one could replace Cross.

This was thought to be the “last straw” that got Tiffany Cross fired from MSNBC- she calls Florida, “the dick of the country”. Hours later she was let go. pic.twitter.com/JqEXTw7LxU

First @ZerlinaMaxwell now @TiffanyDCross. Hmmm…I wonder what could it be? https://t.co/nRLpF8z0ls

Supporting strong Black voices is not for the weak. Too often that support goes missing as soon as it becomes too threatening to the entrenched hierarchy. Tiffany is excellent at her job. I know she’ll shine brighter. But what MSNBC has done is absolutely cowardly and shameful.

IHO Tiffany Cross, here’s a clip of her taking Anthony Scaramucci. It was a golden moment.

DEFUSED: Here’s Elizabeth Warren’s plan to prevent GOP from blowing up the economy

MORE CONTROL: Contraception on the line as MS Gov. Tate Reeves refuses to rule out signing legislation banning it