Remember the game of Telephone when you were a kid? The first person whispers something into their neighbor’s ear, and it gets passed around the circle until it comes back to the first person. And it never sounds the exact same as when it went out because people don’t listen, so they share what they believe they heard.

And that’s how we get MAGA spreading misinformation, in the most simple analogy I could make. 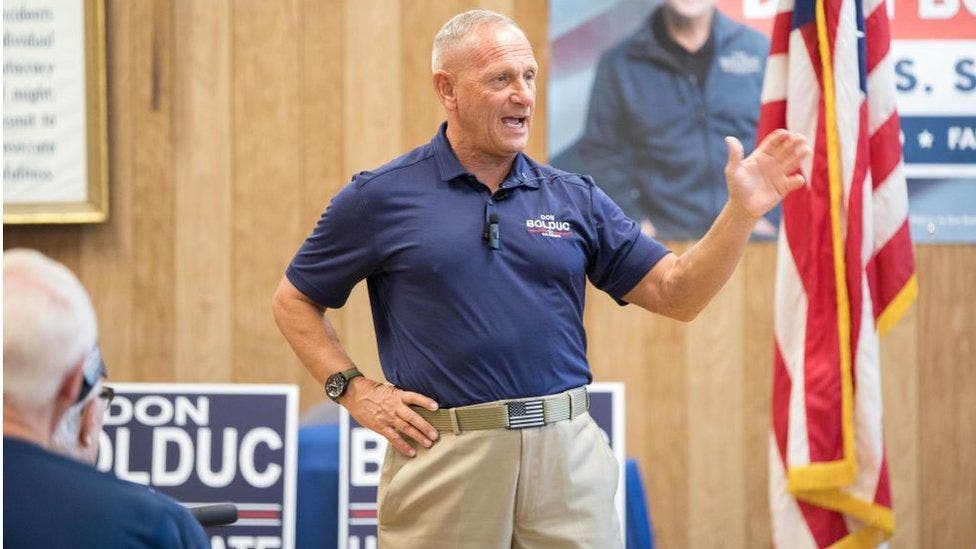 Yes, this man served our country and ordered other people around. I need you to remember this as you read what he believes in. At least he’s retired. But still.

Donald Trump said it himself: Don Bolduc is an election denier, and his endorsement is further evidence that if elected, Don Bolduc would work to overturn our elections and continue to promote dangerous conspiracy theories that undermine New Hampshire’s free and fair elections. pic.twitter.com/BfvUpu2Zh3

Among the many problems with The Other Qrazy Don is that this guy Bolduc believes in the QAnon conspiracy theory that American children in public schools are “identifying as cats” and are demanding they be allowed to “use litterboxes” instead of the bathrooms.

Yes, that’s a thing the Qrazies believe instead of trying to understand what “transgender” means.

This will blow your mind. New Hampshire’s Republican Senate candidate Don Bolduc says abortion decisions “belong” to Republican “gentlemen” state representatives, and that “as a man”, women “get the best voice” when men decide how to regulate their rights. pic.twitter.com/zv4twOWdoU

Going back to the “Telephone” analogy: one MAGA pundit says something transphobic and hateful like, “If a boy says he identifies as a girl, what’s stopping a kid from saying they identify as a dog or a cat?” and BOOM, you have a rumor that becomes a talking point for real races for real government seats.

As a #furry in #NewHampshire, I can verify that, contrary to what Don Bolduc might think, no we do not use litter boxes. I can't decide which is more disgusting: the idea of using a litter box, or the fact that he thinks this is a true story at Pinkerton. @UnionLeader pic.twitter.com/nocQZOBpXA

Yes, Don BolDICK also believes the Furry community uses litterboxes as well as kids at a private school in his state. How about that fear of the unknown mixed with the confusion of also being wildly turned on by it?

HI REPUBLICAN PARTY! I’ve wasted far too much mental energy wondering what our world would be like right now if Republicans were taught to healthily express their sexual feelings instead of repressing them.

We want to assure our community that Mr. Bolduc’s statements are entirely untrue. We invite all political candidates to speak with members of our administration or visit our campus so they can inform themselves about our school before making claims about what occurs here. (2/2)

He won’t ever accept this truth, of course. Because like The Other Don, facts are irrelevant to this BolDICK when he can keep twisting himself into a pretzel of rumor-mongering repression (repretzel?)  that makes him feel safer about his strange sex feels while living in a scary world.

Tbe first fool to fall for this hilarious hoax of a story. Mr Furry Bolduc! pic.twitter.com/Biu8ysFbfq

Don Bolduc is shithouse Qrazy, and yet he and the Democratic nominee in the steadfastly Blue state of New Hampshire are deadlocked in the polls.

Since the state’s motto is “Live Free or Die,” we can only hope voters choose the former at the polls on Tuesday.

INCREDIBLE THREAT: Trump, pretending he's not under investigation for anything, taunts 2024 run