‘Cause karma is my boyfriendKarma is a godKarma is the breeze in my hair on the weekendKarma’s a relaxing thoughtBut for you, it’s not sweet like honeyKarma is a cat purring in my lap ’cause it loves meFlexing like a goddamn acrobatMe and karma vibe like that

–Taylor Swift, who’s had her share of beefs with Kanye West, “Karma”

Started: “I can say anti-Semitic s—- and Adidas cannot drop me,” said Ye (his legal name now) on the Drink Champs podcast earlier this month. Ye had worked with Adidas since 2013 on his Yeezy line of super expensive, super popular sneakers, and thought he was untouchable like most overpaid, over-indulged “artists.”

Going, as of Tuesday: 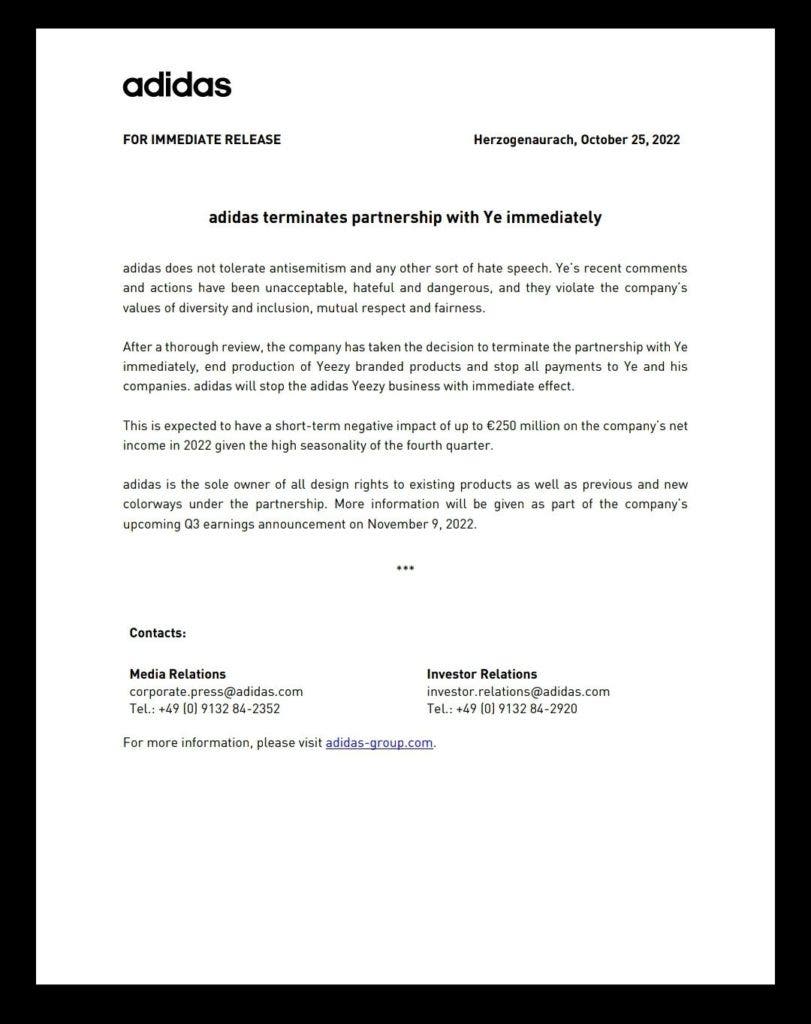 “Immediately” in adidas-speak translates to “a couple of weeks of silence after we originally said we’d review our relationship with Kanye because we had a whole lot of money numbers to crunch.” Karma comes in various guises, and she often travels with her equally stealthy pal, schadenfreude. What you put out there WILL come back to you, even if it does take adidas a full nineteen days to make it happen.

They dropped him because their stock was falling hard and an analyst told them to in order to salvage their stock value they needed to drop him.

Nothing heroic about what they did.

It’s been reported that adidas got an estimated 4% to 8% of its sales from Yeezy products, according to investment bank Cowen. For Ye, it was an even bigger deal, accounting for $1.5 billion of his net worth. But I mean, what’s a Jewish life worth to a sneaker company founded by anti-Semites?

Wow hope this widely available information about the Nazi origins of @adidas doesn’t go viral and cause a massive international boycott in light of their recent silence in the face of violent antisemitism by their partner Kanye West. pic.twitter.com/LTPsKGHYzg

We’d been seeing accountability for Kanye’s hate speech from plenty of others before adidas finally made its announcement Tuesday morning. Gap, Balenciaga, and Vogue Magazine all announced they were cutting ties with Ye. And now Forbes joins them by dropping him from their Billionaires’ List.

Kanye West is no longer a billionaire after Adidas cut ties with him, Forbes reports.

His loss of Adidas has caused his net worth to plummet to $400 million and he is no longer on the Forbes billionaire list. pic.twitter.com/8SzyQqJVjC

Hopefully, more artists and sportsball people will end their own relationships with adidas. They only did right by themselves, and the last time I checked, there are other companies that make sneakers and track pants. BYE, YE!

RACIST RECEIPTS: We have the sickening social media posts of 'attacked' Rubio staffer

WOHL CALL: These MAGA Jerky Boys now have to wear ankle monitors in their moms’ basements