It’s so fun to wake up on a Sunday morning to learn that a bunch of Nazis hung antisemitic signs in support of Kanye West on a freeway overpass in what used to be one of the most liberal cities in the country. Not at all distressing to learn that drivers taking the 405 in Los Angeles actually honked when they saw signage saying “HONK IF YOU KNOW KANYE IS RIGHT ABOUT THE JEWS” while a group of roughly seven whole people made the Nazi salute by a third sign that seems to thank the “goyim.” Totes normal in 2022. 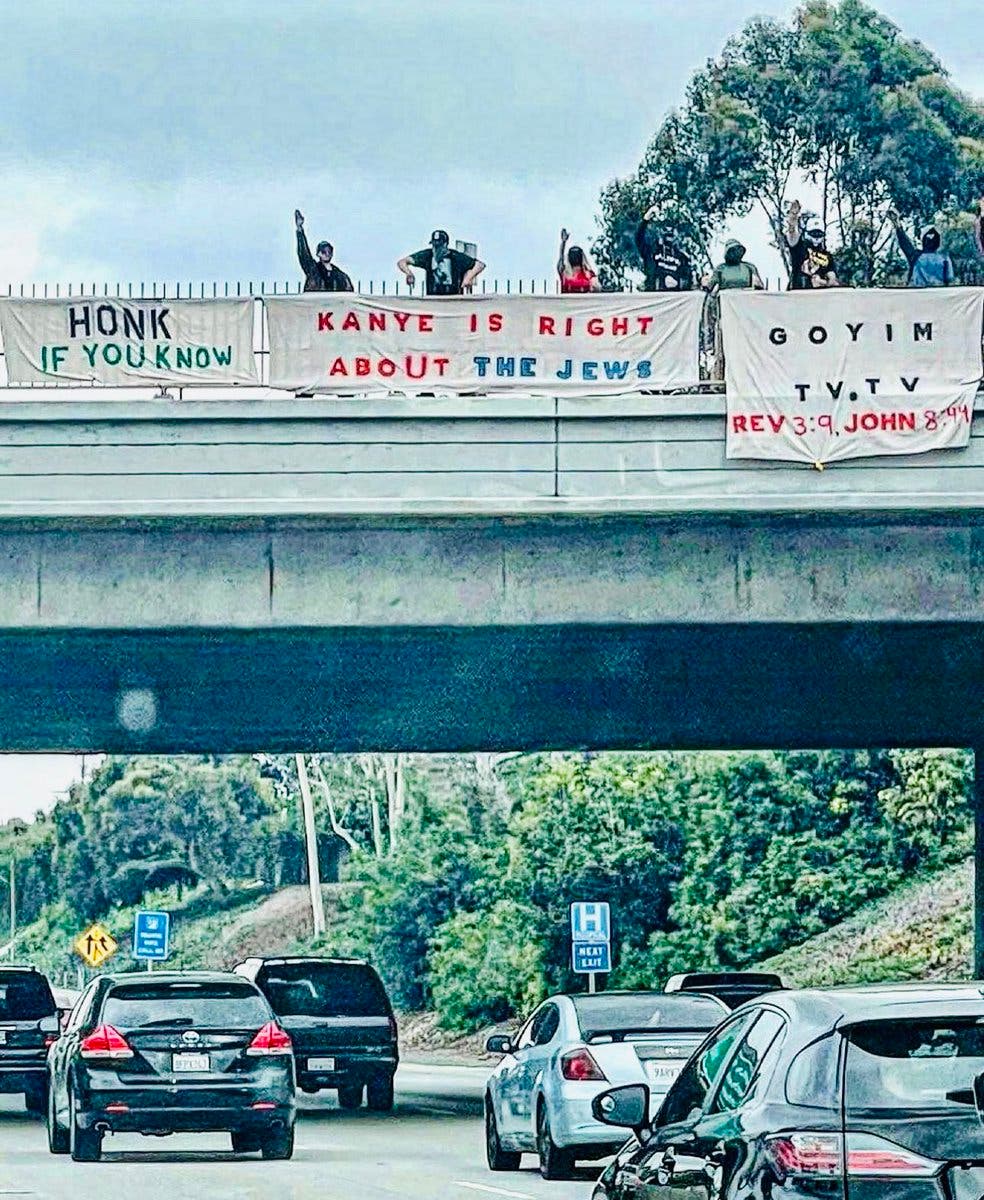 What exactly needs to be said to make people pay better attention to this? While some might call it a stunt, just think about how many cars have driven under those signs since they went up. How many pairs of eyes glanced at those words, including kids seeing them? How did their parents explain those words? And the people who honked, who are they? And why do they think any of this is okay? Because none of it is fine. Hate speech — including antisemitic propaganda — isn’t protected speech and it should never be protected by anyone.

That’s America in 2022. That’s real. Those are Nazis. They want me dead because my parents took the right baby home from the hospital and therefore I was raised in a Jewish-ish home and taught to believe in the teachings of the Torah instead of following the word of Jeebus. Religion is subjective, no one is born hating anyone, and therefore those people making those Nazi salutes didn’t decide this morning that they hated us. They’ve been programmed by their own families and society since they were brought home by the right parents who taught them all the wrong things.

I spoke with @DanaBashCNN a few weeks ago about how the group responsible for yesterday’s incident in Los Angeles tries to turn their antisemitism into entertainment and raises money for their activity online. https://t.co/U7c5uiVHjq

I once again must reiterate that my people don’t control anything and there is no such thing as the “Atlantic slave trade” whatever that’s supposed to mean. We do not control the world. Not the media, not the banks, not the entertainment industry. If any of that was true, there would be no antisemitism in the media, we’d silence it. I’d also have a super sweet book and film deal and so many digits in my bank account that I wouldn’t have to choose between buying food for myself or food for my cats the closer it gets to rent day. So please shut the entire eff up with that hateful antisemitic propaganda.

Neo-nazis in Los Angeles are displaying antisemitic banners over the 405. Location was the 405 South a few exits north of the Howard Hughes Center. photo by @BrookstoneUSA pic.twitter.com/zkwqJ7TF8e

Meanwhile, Kanye is losing support from the brands he’s been working with, such as Balenciaga and Vogue Magazine, while Adidas is remaining frustratingly silent ever since they announced their relationship with Yeezy Breezy No Longer a Vogue Cover Boy was “under review” earlier this month. I called Adidas HQ here in Portland where I live, and I have yet to get a response back from the message I left.

Aw, @adidas; you’re trash. If you’re reading this, don’t like it; copy and paste the following. If you do this simple act wrong, I will call you out by name and lightly clown you COPY AND TWEET THE FOLLOWING:@Adidas, why are you staying in business with an Antisemíte? https://t.co/m6kMtTGNZl

Please don’t ignore antisemitism when you see it or hear it. Call it out and call it out loudly. Shame the shameful behavior. Make people hear you when you tell them you won’t tolerate Nazis in your country. Because we never have to be nice to Nazis, EVER.