MAGA is forking over the cash – just not to the GOP. Ex-President Donald Trump’s Save America PAC is raking in the moolah, bringing in over $100 million since Trump left office, after sending aggressive emails to his base and stiffing Republican candidates.

“As with all things Trump, there’s a resignation that this is just what he’s going to do. You do hear a lot that he’s not spreading the wealth. He’s hoarding the money and keeping it — that’s what people are talking about.”

Long-time former Federal Election Commission counsel, Adam Novi, said “To my knowledge, no other former president has ever maintained a PAC, much less a PAC with cash-on-hand in the nine figures.”

“As they keep hitting up donors and engaging in extremely unsavory and deceptive fundraising practices, I think one major question is where all of this money is going to go.”

The ex-President has made Senate Minority Leader Mitch McConnell (R-KY) his new scapegoat and fundraising patsy. Trump took to his struggling social media platform Truth Social to criticize the aging Republican Senator and make McConnell the focus of fundraising emails: 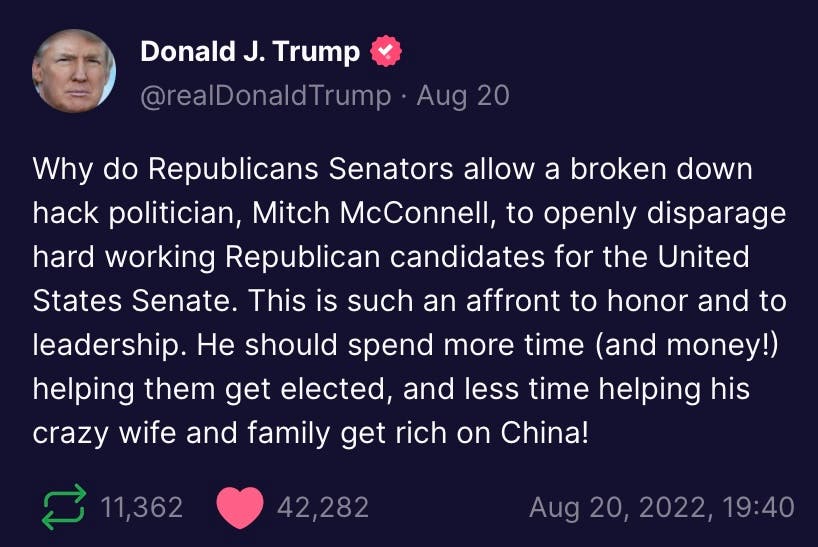 Though PAC-raised money is supposed to go to candidates, there’s nothing stopping Trump from using it for personal reasons as long as he isn’t a political candidate. According to Noti, “The laws around candidates helping themselves to their own campaign money are fairly strict.”

“Trump keeps raking it in even as the Republican Party struggles,” the Times reported.

Senator Rick Scott (R-FL) fell into the spotlight recently after it was revealed that as chair of the Republican fundraising arm for GOP Senate candidates — the NRSC — he has only a little over $20 million of the $180 million raised left to spend in the midterm contests. The National Republican Senatorial Committee has canceled tens of millions of dollars in advertising in key battleground states.

But Trump doesn’t care – and neither should we.

If the well-known con man, thief, and grifter doesn’t want to share the wealth with struggling Republican candidates – good. America and its democracy will be better for it come November.

Original reporting by Jackie Calmes at The LA Times.

NEW STUDY: Why Texas is rated 2nd worst for quality of life