“The documents reveal a flurry of efforts by state authorities to secure voting machines, poll books, data-storage devices, and phone records as evidence in a probe launched in mid-February.”

NEW: Police records obtained by @Reuters depict a statewide push by pro-Trump activists to access election machinery in search of evidence for debunked theories that equipment was rigged in a crucial swing state.https://t.co/oyyWnceVQW

Fueled by the “Big Lie“, state politicians, county clerks, officials, and local law enforcement agents are implicated in various attempts to perpetuate already debunked claims of widespread voter fraud. The state has even devoted a page on its website to combat the most common misinformation surrounding unsubstantiated claims about the integrity of its elections and the security of voting machines.

Roscommon County Clerk Michelle Stevenson, state Rep. Daire Rendon, and Barry County Sheriff Dar Leaf – all Republicans – have been connected to the investigation that spans several counties. Despite criticism from local officials, Leaf launched his own “investigation” by sending Freedom of Information Act requests to 17 clerks in Barry County.

“We’re not after the clerks. We don’t think they’ve done anything wrong…but they have information I need. That’s all you need to know. Later on, when the report’s done, we’ll be able to let people know,” Leaf told the local paper, The Hastings Banner.

“I was told by my clerks that they were told not to say anything to each other or to me. So I don’t know what (Leaf and his team) are trying to hide. I’m told by the investigator that they’re doing this under the element of surprise, ” Palmer told independent media outlet Bridge Michigan.

Barry County prosecutor Julie Nakfoor Pratt was skeptical of the unauthorized probe. While stopping short of being critical of Leaf personally, Pratt told Bridge “I know investigations are fact-finding missions, but usually there’s some allegation that provides some basis for that, and I’ve not seen it.”

Prior to launching his own investigation, Sheriff Leaf made an unsuccessful attempt to seize Dominion voting machines.

And he “provided updates on the effort to Trump allies including attorney Sidney Powell and a contact for … Michael Flynn.”https://t.co/IktGsRJjTZ

Emails obtained by Bridge, communications between Leaf’s attorney Carson Tucker, and Trump affiliates. Including “Kraken” lawyer Sidney Powell, and an associate of pro-Trump non-profit, Fight Back Foundation – of which Trump ally L. Lin Wood is the chair – show Tucker asking how to do precisely that. 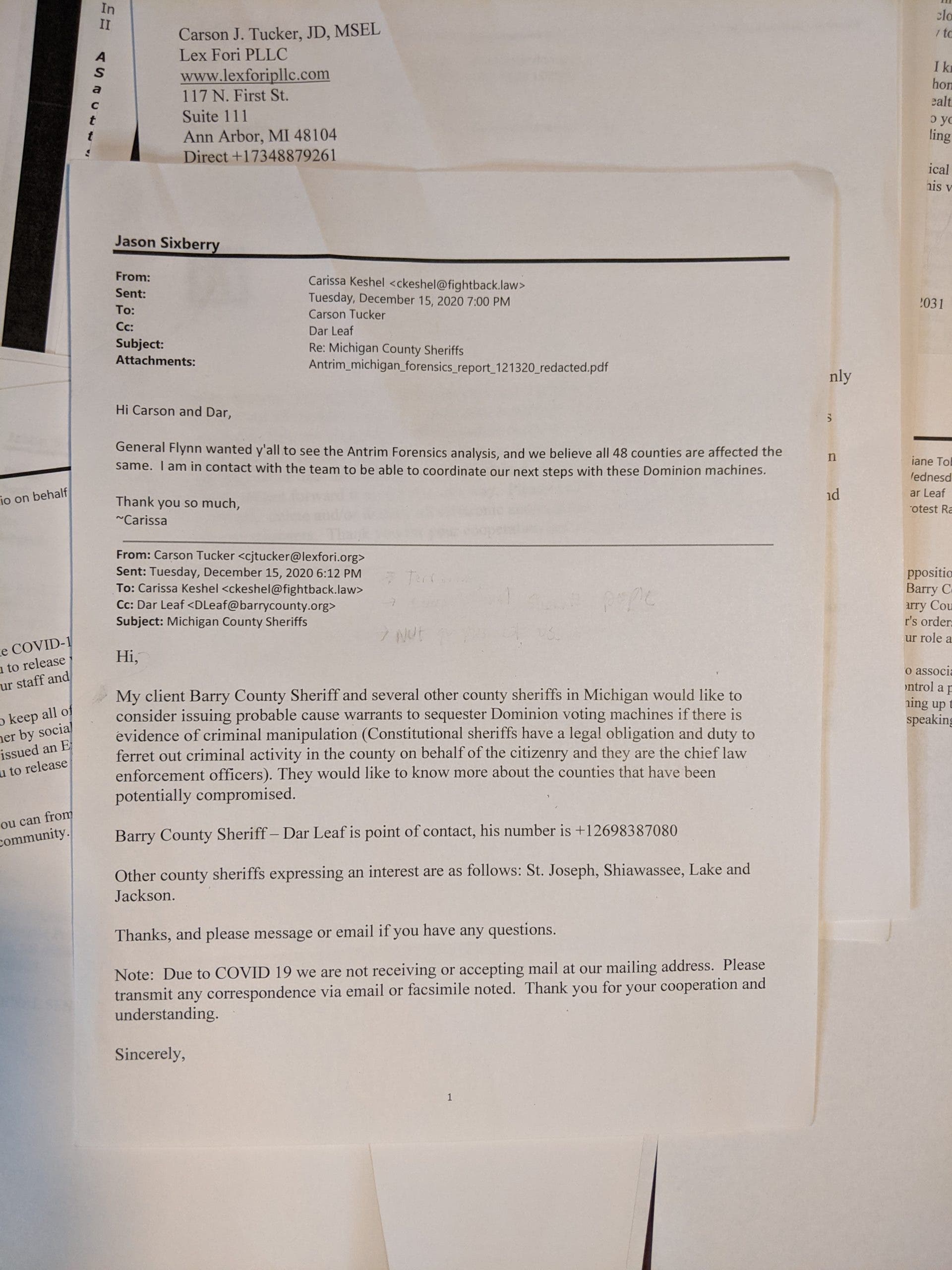 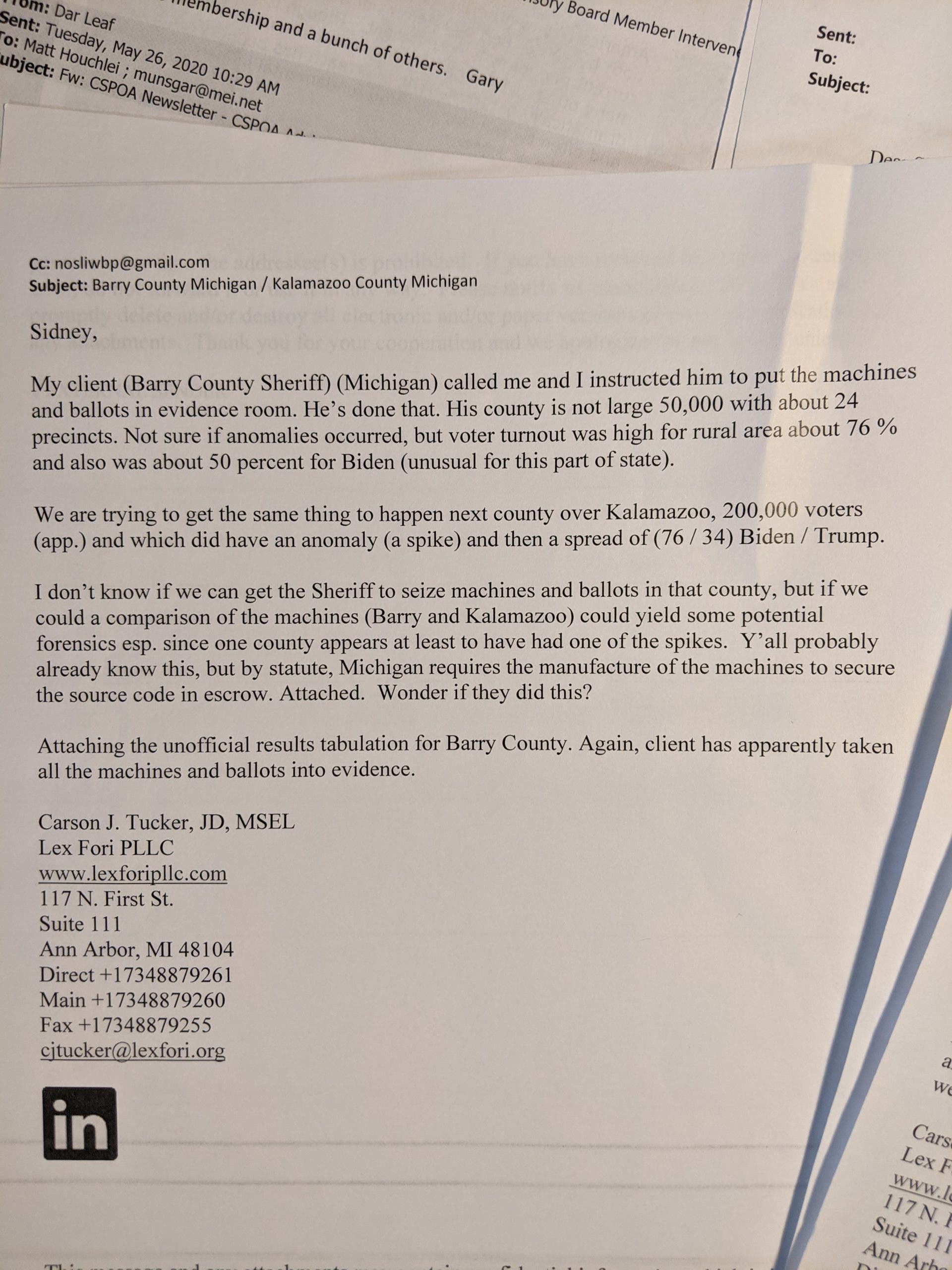 Stevenson’s office was raided in March after she admitted to giving unauthorized third party access to voting machine data. While Rep. Rendon was party to a lawsuit that tried – and failed – to overturn the results of the 2020 election, according to Reuters, Rendon asked multiple clerks to turn over voting equipment.

Michigan Secretary of State Jocelyn Benson asked Attorney General Dana Nessel to launch a criminal investigation after a breach was discovered in Roscommon County. At least two machines were turned over to an anonymous — and unauthorized — third party by a Richfield Township official. An investigation to see if a more widespread conspiracy is now in play.

“If there is coordination, whether it’s among those in our state or reaching up to a national level, we can determine that, and then we can seek accountability for all involved,” Benson in an interview.

A YouTube video shows Sheriff Leaf speaking at the America First Rally in Grand Rapids, Michigan in May 2020. This rally was organized in protest of Gov. Gretchen Whitmer’s coronavirus lockdown orders. A separate rally at the State Capitol ended with armed protesters storming the building.

At least 17 breaches of election security have been uncovered nationwide, including in North Carolina and Colorado. Michigan has been a central focus of Trump allies’ attempts to overturn the results of the 2020 presidential election. Recently, the anti-lockdown group Unlock Michigan was subject to investigation by Attorney General Nessel due to fraudulently obtained signatures to strip Gov. Whitmer of executive powers. Several men arrested in a plot to kidnap Whitmer from her vacation home were set free. And most recently, a former Wisconsin Judge was killed in a targeted attack – Governor Whitmer’s name was found on his “hit” list.

If Secretary of State Benson wants to know if the voting machine breaches are a coordinated effort, I will tell her to follow the one consistent thread between all 2020 election-related events – Donald Trump. If there’s one thing we should have learned since the 2016 presidential election, it’s that where there’s Trump, there’s usually fire.

Original reporting by Nathan Layne and Peter Eisler at Reuters.

PROFESSIONAL TROLL: How Marjorie Taylor Greene has squandered her time in Congress

JAN 6th DEPOSITIONS: Giuliani warned Trump that this move would get him impeached