A future ex-House Republican just got linked to terrorism funding from the foreigner whose illegal donations he collected and covered up by lying to the FBI.

When it comes to the GOP, there is no shortage of criming, and today is no different. The latest to fall from political grace is none other than Congressman Jeff Fortenberry (R-NE).

Representing the state of Nebraska since 2005, Fortenberry has announced his resignation amid bipartisan calls from both Speaker of the House Nancy Pelosi (D-CA) and House Minority Leader Kevin McCarthy (R-CA) to step down after being convicted by a California jury of lying to the FBI. (Resignation letter embedded below.)

In October 2021, Fortenberry was indicted for statements he made during an investigation into contributions to his 2016 political campaign by a foreign national, Nigerian-born billionaire Gilbert Chagoury.

Chagoury’s donations could be seen as more of an “investment.” He has been the subject of investigations in the past. In 2010, he was removed from an airplane in New Jersey and questioned by the Department of Homeland Security after being placed on the no-fly list. In 2015, he was denied a visa and entry to the United States.

The billionaire has also been suspected of being a backer of authoritarian rule in Lebanon and having financial ties to the terrorist group Hezbollah.

But all support for the criminal congressman was not lost.

At least one Republican spoke up in support of lying to the FBI to cover up your ties to terror money: none other than the jacketless GOP Congressman Jim Jordan (R-OH), who in his not-so-eloquently way of speaking. When the indictment was announced he told Politico:

“I haven’t seen it, but Fortenberry sounds like he got set up.”

Well, there you have it. Case closed. Right? Wrong.

The ongoing investigation into Chagoury ended with the billionaire admitting to using conduits to make political contributions to Republicans between 2012 and 2016 and paying a $1.8 million fine.

It was a drop in the bucket for the man considered to be one of Africa’s richest men and the owner of a $135 million Beverly Hills home.

And Fortenberry is not the only not ex-House Republican to receive illegal contributions.

Current GOP representatives Scott Perry (R-PA) and Chris Smith (R-NJ) were also involved in the investigation, but have not been charged.

The over $30,000 donated to Fortenberry was, however, significant enough to warrant further investigation and questioning. That’s when the Nebraskan convict lied to the FBI about his big illegal campaign contributions.

Gilbert Chagoury’s attempts to infiltrate the American political scene monetarily have been going on for over a decade, focusing primarily on GOP politicians. He sponsored an art exhibit at the George W. Bush Presidential Center, and Politico also reported that Chagoury donated a total of $100,000 to Mitt Romney’s presidential campaign in 2012 and $30,000 to Representative Darrel Issa (R-CA) in 2014, and another $10,000 to former Representative Lee Terry (R-NE), like Fortenberry, also from Nebraska.

Issa refused to talk on the record about his Chagoury cash.

Though born in Nigeria, Chagoury is of Lebanese descent. His motivation for building political allies is based on a pro-Lebanon agenda. His organization — In Defense of Christians — hired Mark Corallo to lobby for it in Washington.

If you’re not familiar with the name, Corallo would later go on to be the spokesperson for Donald Trump’s legal team during the Mueller probe. He also sits on the board of In Defense of Christians.

While the group is bipartisan, Fortenberry’s indictment is linked to his attendance of an In Defense of Christians event in Glendale, California.

Of course, Jeff Fortenberry still proclaims his innocence, denying knowledge of the donation or where it came from. It’s his 5th Amendment right, even after conviction.

While facing a sentence of up to 15 years — 5 years maximum for each charge — Fortenberry wasn’t barred from serving out his term. Yet, he called it quits anyway, resigning in disgrace in a letter to Congress.

“What you spend years building, someone could destroy overnight. Build anyway.” – from the poem “Do it anyway” cited in Fortenberry’s resignation letter.

Under state law, there must be a special election within 90 days to fill the seat, before the midterm elections happening this November.

Jeff Fortenberry has announced his last day in office will be March 31st, and that he intends to appeal. Whether he wins that appeal or not is still uncertain, but it’s apparent that the bulk of the party would like to move on…without him.

You can read more about the Nigerian billionaire behind Fortenberry’s transition to being an ex-House Republican on the Department of Justice website here. 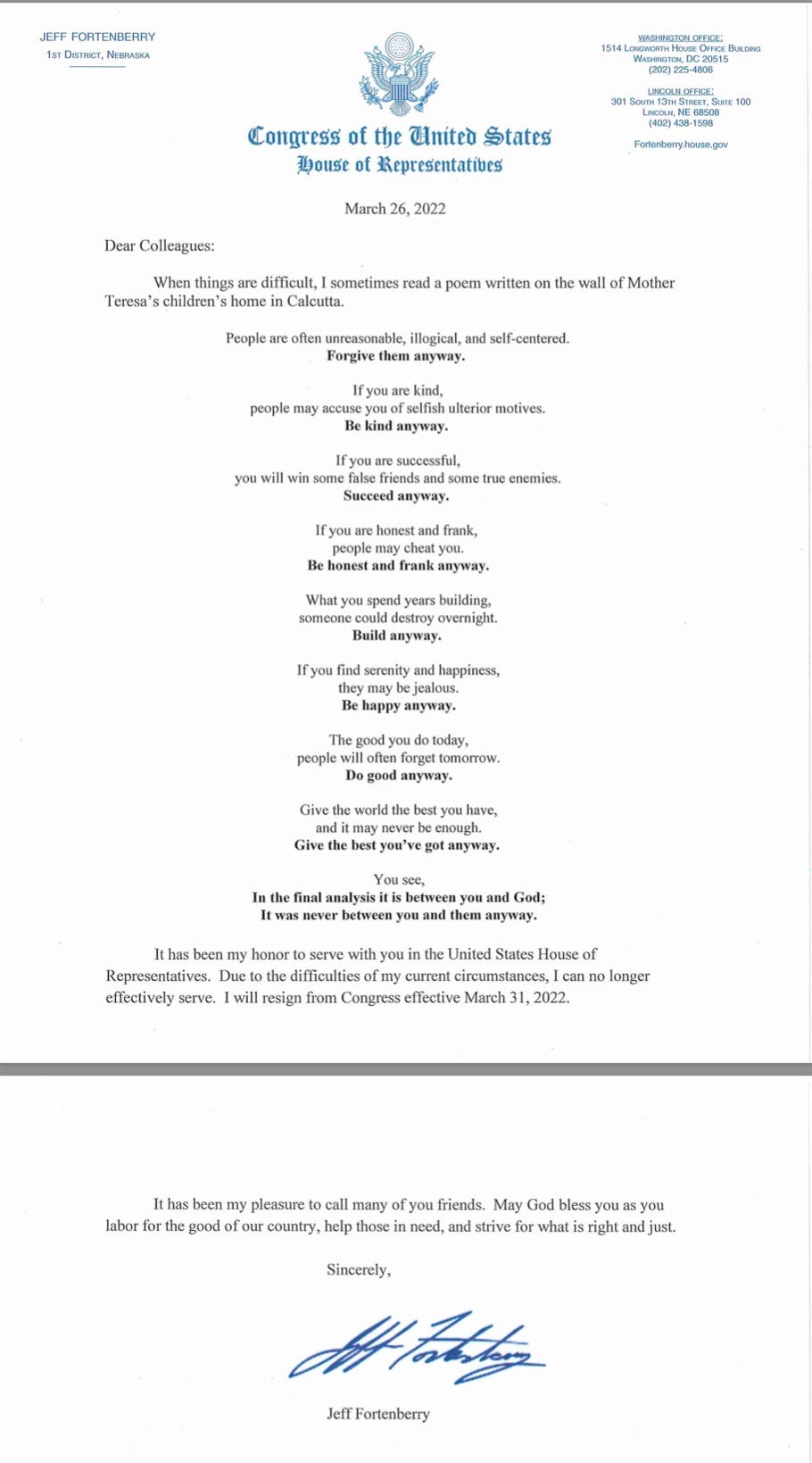 INFLUENCERS: The politics of the Oscars are subtler than a slap in the face

RALLY: Here’s what you missed from Donald Trump last night in Michigan