If you had any doubts that the recent spate of negative court rulings, prosecutorial pressure, and bleak news about the legitimacy of his financial statements was causing Donald Trump to soil his adult diapers, the latest press release posted to Twitter by his social media surrogate Liz Harrington should help dispel them.

“My long-term accounting firm didn’t leave me for any other reason than they were harassed, abused, and frightened by DA’s and AG’s that for years have been threatening them with indictment and ruination. They were “broken” by these Radical… pic.twitter.com/cdcSeZENDl

Trump seems to think that his supporters will actually believe that Mazars — the accounting firm that has handled the Trump Organization’s tax and accounting business for many years — only issued a statement resigning from the assignment and notifying the world that their work product is no longer to be regarded as accurate due to “years” of harassment by legal authorities.

Saying that Mazars was “‘broken’ by these Radical Left racist prosecutors,” the disgraced former president goes on to boast about the Trump Organization’s low debt load (a likely sign that he’s worried about defaulting on that debt)  and incredible assets that he describes as “some of the greatest” in the world (the better to get a good price for them in any future asset sales.)

Trump’s defensive protestations received little love on social media where the comments on his post by proxy ran from indignancy to outright mockery. 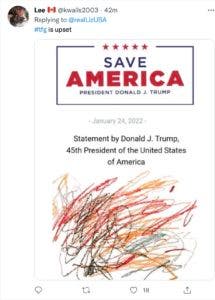 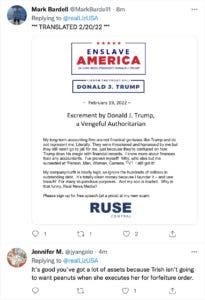 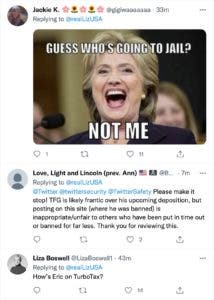 Trump's own accounting firm NOT ONLY DROPPED HIM, BUT, WHILE DOING SO, THEY PUBLICLY DECLARED THAT THEIR OWN COMPUTATIONS FOR Trump SHOULD NOT BE CONSIDERED TO BE FACTUAL. THAT CERTAINLY SEEMS AS THOUGH THAT ACCOUNTING FIRM, AS WELL AS THE PROSECUTORS, FOUND MAJOR DISCREPANCIES. 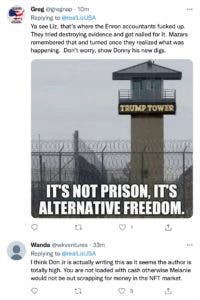 Apparently, most people, on Twitter at least, can’t find much credibility in anything that Donald Trump posts in his own defense, given his long track record of constant dissembling.

As Letitia James — the New York State Attorney general spearheading the civil investigation of the Trump Organization’s financial shenanigans — well knows, facts and evidence far outweigh any blustering declarations from the twice-impeached former president with a long history of money-grabbing scams such as Trump University under his belt.

Let Donald Trump babble all he wants, but we all know that indictments are likely to be issued in the near future once the prosecutors have all the documents and testimony they need to present to the grand jury. With Trump and his family now forced to sit for depositions by the courts, that day is sooner than Trump wants, so he’s throwing tantrums like the big baby he has often been portrayed as. 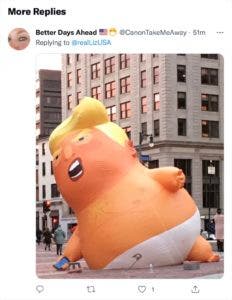 MAJOR FAIL: We tried to sign up for Trump's new Truth Social app. It doesn't work.

A BFD: NY AG Letitia James’s lawsuit against Trump and fam is a doozy