Donald Trump has always defined himself as a prime example of masculinity, although most observers would add “toxic” to modify that attribute.

It is a strange and retrograde type of masculinity that Trump has always seemed to value, an old fashion view of masculinity that emphasizes strength and belittles any outward signs of weakness, despite the former president’s constant whining and self-victimization that always undermined any sense that he could achieve the John Wayne-type of classic Hollywood stoicism.

Today, as Trump finally left the national stage as president, his two oldest sons must have disappointed him greatly with their displays of emotion, openly displaying their weakness and their lack of ability to hit the standards that their father aspired to for them by bawling publicly at the psychologically-charged moment of their departure along with their disgraced father on Air Force One to escape to Florida.

Don Jr. and Eric crying before they get on AF1. pic.twitter.com/vtCbxVyUtd

The hastily exiting president’s oldest daughter was equally distraught by the circumstances that the family now finds itself in as photos of the tearful Ivanka standing next to her unperturbed husband, Jared Kushner, wearing an Alfred E. Newman grin, flooded social media. 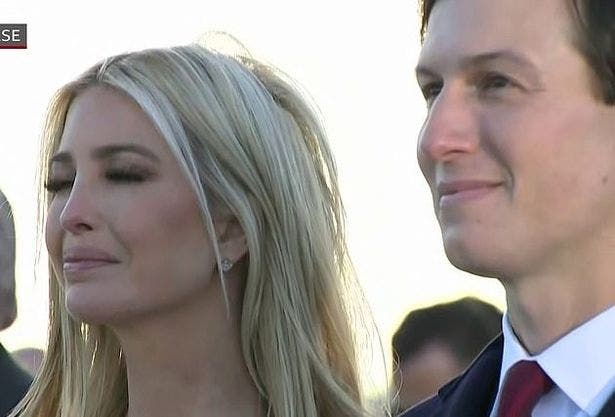 Whether they were crying over the Trump family’s loss of power — along with an election that they still refuse to concede in defiance of reality — or tearing up at the prospects of their likely imminent indictments is difficult to discern without a therapist’s insight, but they are likely tears over the collapse of their lives as they’ve known them, particularly over the last four years.

Schadenfreude ruled the responses to the footage of the wailing Trumps. While the Trumps’ pity party may not have many people wanting to join them right now as all eyes turn to the Biden administration, this last look at MAGA tears is an image that provides some measure of solace to those in the Anti-Trump resistance who’ve been waiting for years for this moment.

Let’s savor it while we can.