As Donald Trump is dragged kicking and screaming from the White House — at least metaphorically — he still clings to the delirious proposition that he and his administration have done a phenomenal job in combatting the COVID-19 pandemic in this country.

Phenomenally bad, you might reply, but Trump will simply turn around and point to the development of two vaccines on the verge of emergency approval by the FDA and claim credit for their development through his administration’s Operation Warp Speed program to accelerate a process that normally takes years to complete.

Never mind the fact that one of those vaccines, the one developed by Pfizer, was done completely outside the parameters of Operation Warp Speed, Trump will claim the glory nonetheless.

Trump’s sudden enthusiasm for vaccines may raise suspicions that he is merely championing the COVID-19 prophylactic treatments because he has nothing else to crow about in regards to the viral outbreak that has killed over a quarter of a million Americans and counting, thanks to his failures to come up with a nationally coordinated plan to fight the disease.

Trump has improbably had an eye on how history will judge his time in office and likely sees the development of vaccines that could end the destructive pandemic as one of the few diamonds that can be extracted from the rubble of his presidency.

He said as much in a tweet that he posted a couple of weeks back when the Moderna vaccine was announced.

Another Vaccine just announced. This time by Moderna, 95% effective. For those great “historians”, please remember that these great discoveries, which will end the China Plague, all took place on my watch!

At a press conference today, Trump’s Press Secretary Kayleigh McEnany even referred to the upcoming drugs as “the Trump vaccine” while discussing the rollout plan.

“And we will have 40 million doses by the end of the year, which is a tremendous achievement — not just to have gotten a vaccine in this time, but to have produced 40 million in advance. It’s — having a businessman as President, it’s the Trump vaccine,” McEnany boasted.

Trump’s recent enthusiasm for vaccines, however, hardly seems plausible given his historical association with the conspiracy-minded anti-vaxxer contingent among his followers — and his past comments on vaccines on social media.

Luckily, Trump’s old tweets are always at the ready to come back to haunt him.

Healthy young child goes to doctor, gets pumped with massive shot of many vaccines, doesn't feel good and changes – AUTISM. Many such cases! 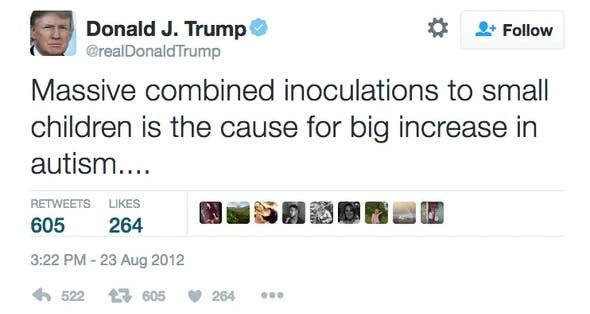 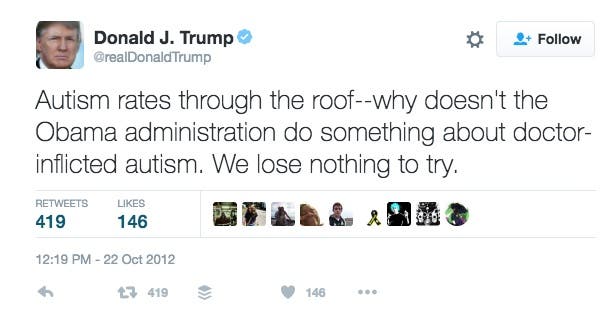 Scientific studies have proven that there is no causal link between autism and vaccines, but Trump has never been one to let mere facts interfere with his agenda or with his history re-writing efforts.

One would think that, in fact, Donald Trump has no deeply held principles or beliefs outside that which might be the most politically or financially opportune at any given moment, as quickly as he changes opinions to fit the occasion.

If only someone could develop a vaccine against Trumpism and innoculate everyone in this country with it post haste!

Whoever comes up with that vital and much-needed medicine is the one who deserves to be remembered by future historians.