How one responded to Attorney General William Barr’s revelation — made today in an interview with The Associated Press — that the Justice Department has not uncovered evidence of widespread voter fraud that would change the outcome of the 2020 presidential election depends on whether or not you are an attorney continuing to attempt to overturn the election results on behalf of Donald Trump.

While those who do not fall into that rarefied category saw Barr’s admission as a sign that the Republican establishment is beginning to face the reality of Trump’s defeat by Democrat Joe Biden, one cannot say the same of his hair-dye-leaking barrister Rudy Giuliani.

The former New York City mayor, along with fellow Trump attorney Jenna Ellis, responded to the news of the Attorney General’s quote that “To date, we have not seen fraud on a scale that could have affected a different outcome in the election,” with a statement published on official Trump campaign letterhead that essentially claims that Bill Barr doesn’t know what he’s talking about. 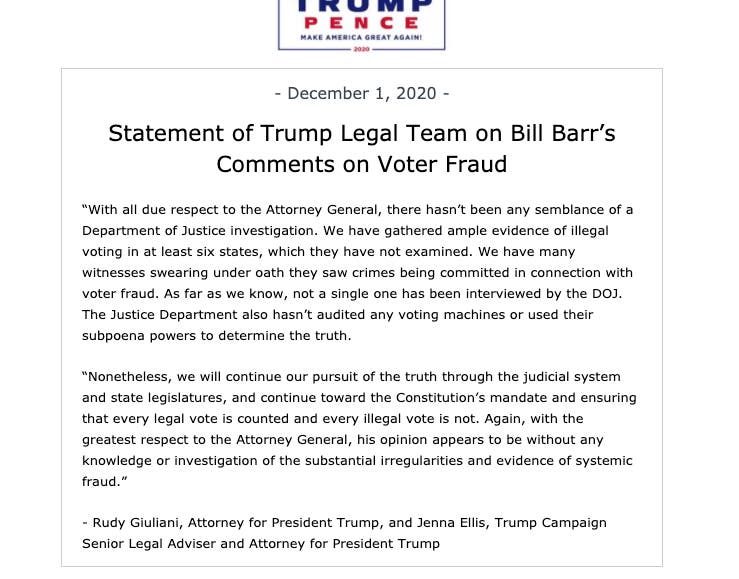 The Trump legal team’s indication that Trump’s legal fight will continue despite the assertions by the Attorney General that the legal court jester for the president was running a fool’s errand means that the nation will suffer through more sore-losing temper tantrums because of a president who simply can’t accept that he lost the election fair and square.

With Attorney General Barr reportedly meeting with Trump at the White House this afternoon, we will soon see whether he suffers the same fate as the last senior administration official who dared to say that reports of election manipulation “have been unsubstantiated or are technically incoherent,” Christopher Krebs, the former head of the Department of Homeland Security’s Cybersecurity and Infrastructure Security Agency.

Krebs was famously fired by Trump in a Twitter post after the president disputed that assessment of the unprecedented security of this election and repeated a litany of claims about election fraud that Twitter itself felt compelled to flag as disputed.

…votes from Trump to Biden, late voting, and many more. Therefore, effective immediately, Chris Krebs has been terminated as Director of the Cybersecurity and Infrastructure Security Agency.

Whether we will soon see Rudy Giuliani — a man said to be under active investigation by the prosecutors in the Justice Department’s Southern District of New York, a division that he once headed — will be named as acting Attorney General for the last 50 days of the Trump regime after the president angrily terminates Barr for the cardinal sin of disloyalty remains to be seen.

Stay tuned to the news today, though. With Donald Trump just about any desperate measure is possible.