Like it or not, Ivanka Trump and her husband Jared Kushner will be leaving the environs of the White House come January 2oth.

Recent reports indicate that rather than return to New York City — where they lived before the four-year debacle that was the presidency of Ivanka’s father — the couple is looking to set up their household in the now less-hostile territory of nearby New Jersey.

One of the reasons likely for Ivanka’s reluctance to go back to the family’s old stomping grounds in the premier metropolis in the nation is the ostracism they now face among their New York City social circle after having been intimately involved in the inner workings of the most disastrous and corrupt presidency in American history.

After all, when you’ve been associated with the caging of migrant children after separating them from their families and have been knee-deep in the failed response to the COVID-19 pandemic that so devastated New York City during the initial stages of the outbreak, your old acquaintances won’t forget.

If it wasn’t perfectly clear to Ivanka that she would not be able to easily resume her old life as a rich and entitled socialite in New York, two comedians from the city have started a new campaign to hammer the point home.

Jason Selvig and Davram Stiefler, a comedy duo who perform as The Good Liars, have plastered the walls and lampposts of the city with faux “Wanted” posters featuring a picture of Ivanka Trump emblazoned with a prominent “NOT WANTED” notice.

In the style of traditional “Wanted” posters posted by law enforcement agencies, these fake notices feature a description of the person pictured in addition to their visage, in this case including details like ” Hair: Blond,”  “Accent: Fake Posh,”  and “Eyes: Dead Behind.”

In an even more devastating putdown of Ivanka’s husband Jared, the posters also include this biographical detail: “Married to Slenderman? Yes.” 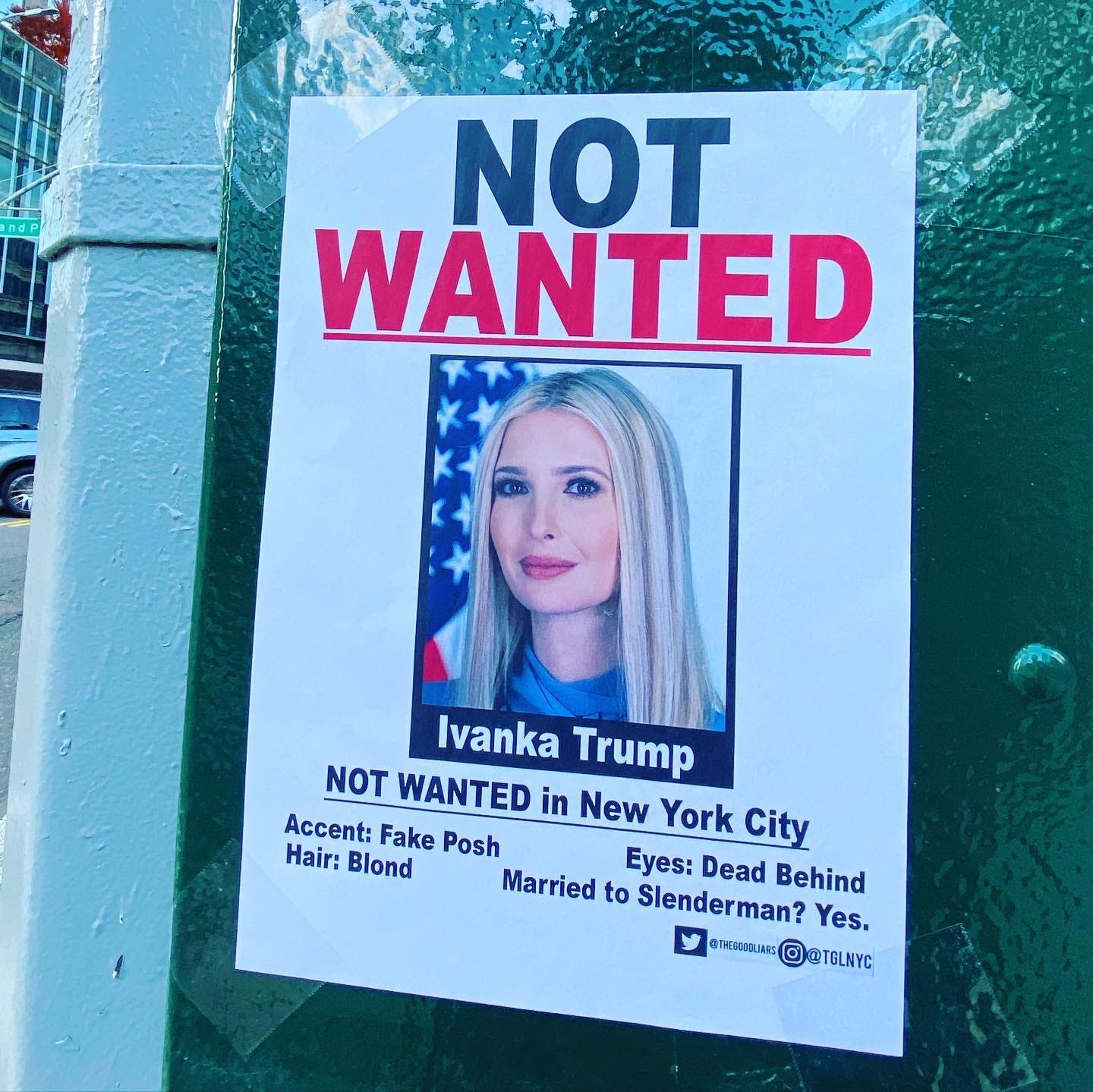 The posters underline the sentiment behind statements made by people who have in the past socialized with the now shunned couple.

“[The President] was so awful and divisive about New York, saying it’s a nightmare or that it’s empty, or a has-been,” a New York writer who has socialized with the couple in the past told CNN. “No one here is going to forget that. To even come back here after everything he’s said, it’s not going to work.”

As for Jason Selvig and Davram Stiefler, this is not the first Trump-related prank that the Good Liars have perpetrated.

The duo was also behind the purchase of the web domain DonaldJTrump2024.com, filling the mock campaign web site for the next presidential election with messages making fun of Donald Trump’s election loss, including one reading “Trump is a Loser.”

While the “NOT WANTED” posters may actually be mild satire at Ivanka and Jared’s expense, the animosity toward the Trump family in New York City and many other urban areas is real.

Until Donald Trump, his family, and his Republican enablers are held to account for the damage that they inflicted upon the United States of America, they should expect no warm embraces from those who had to suffer on account of their crimes.