After pharmaceutical giant Pfizer announced today that initial studies have determined that its COVID-19 vaccine is effective at preventing the disease in 90% of its test subjects, the Trump administration fell over itself to rush to claim responsibility.

The nominal head of the administration’s coronavirus task force, Vice President Mike Pence, rushed to post a self-congratulatory boast on Twitter claiming responsibility for the success of the company in its research efforts and attributing the development of the vaccine to Operation Warp Speed, the federal government’s public-private partnership initiative launched to turbo-charge the response to the pandemic.

HUGE NEWS: Thanks to the public-private partnership forged by President @realDonaldTrump, @pfizer announced its Coronavirus Vaccine trial is EFFECTIVE, preventing infection in 90% of its volunteers.

Pence wasn’t the only Trump administration mouthpiece attempting to transfer the glory of the scientific accomplishment on behalf of Donald Trump.

The rush to bask in the accolades, unfortunately, ignores one simple and glaring fact — Pfizer has never accepted a penny of federal money for their research and development of this new vaccine and was not a part of the program that both Pence and Haley cite.

“We were never part of the Warp Speed,” said Kathrin Jansen, a senior vice president and the head of vaccine research and development at Pfizer. “We have never taken any money from the U.S. government, or from anyone.”

ICYMI: Why is @Pfizer financing #Covid19 #vaccine development on its own – instead of accepting government funding? $PFE CEO Albert Bourla says “I wanted to liberate our scientists from any bureaucracy. When you get money from someone…that always comes with strings.” pic.twitter.com/t2IQPP9Wn4

Of course, it’s easy for a major pharmaceutical company to risk its own money in formulating and testing a vaccine when they have a promise that the federal government will purchase as many as 100 million doses at a cost of nearly $2 billion and ensure a tidy profit for your efforts.

Pfizer’s announcement today concerns just the preliminary results for human studies that will continue to further explore the safety and efficacy of their vaccine for several months longer before any mass production and distribution can begin.

Social media responded to the Trump acolytes’ attempt at taking credit for the progress of this particular vaccine with harsh rebukes.

“We were never part of the Warp Speed,” she said. “We have never taken any money from the U.S. government, or from anyone.”
She said she learned of the results from the outside panel of experts shortly after 1 p.m. on Sunday."https://t.co/nTQx7BgBpy

Hmm. These guys pray to the Devil, if you ask me.

Pfizer rejected any help from Trump.

Nikki Haley has shown her true colors. She can never be trusted.

“The New England Patriots won the Super Bowl, Congratulations to Jerry Jones & the Dallas Cowboys for making the NFL great again!” – this is how absurd your praise sounds right now. Pfizer didn’t take a dime of your dear leader’s socialized vaccine program money. But nice try. 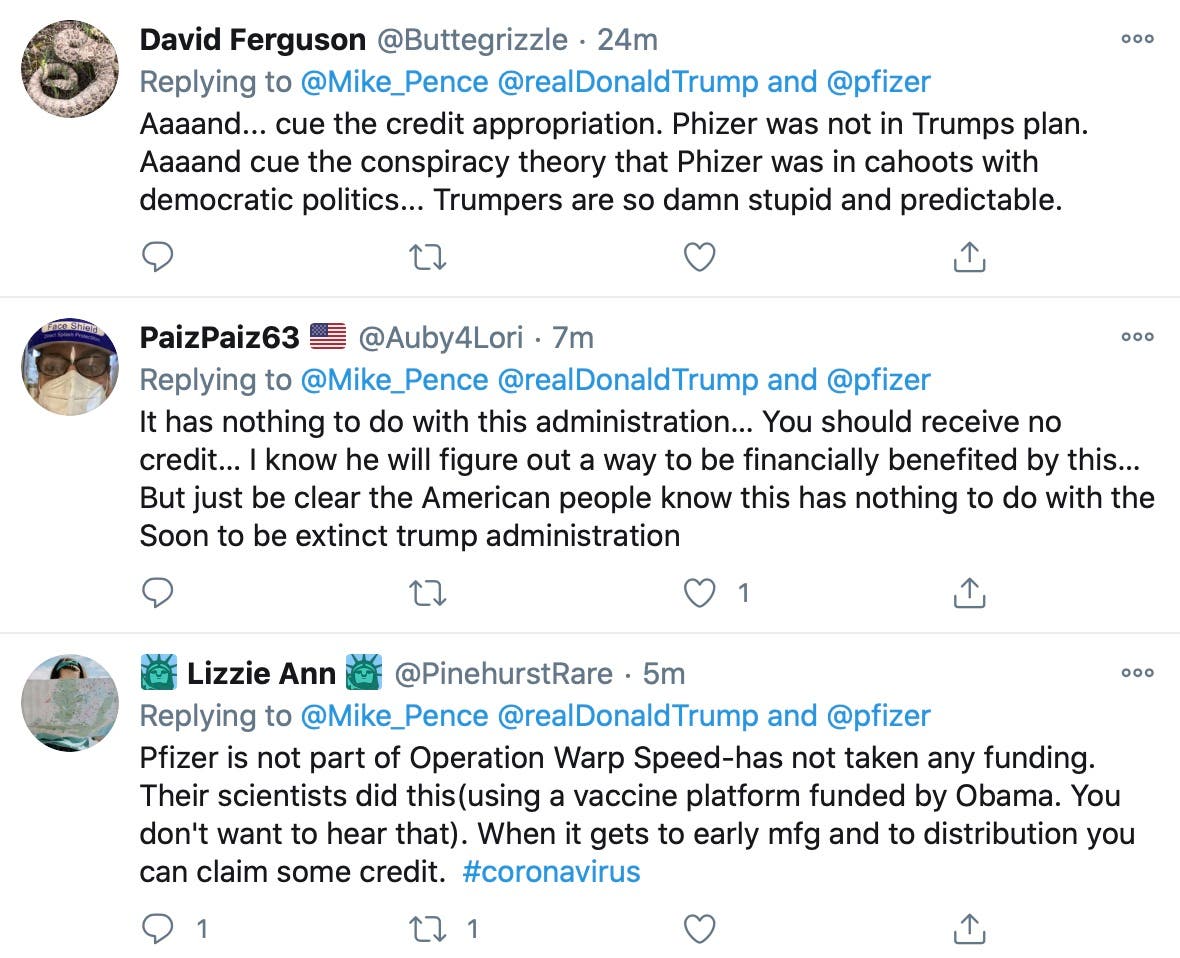 Luckily, the Trump administration’s efforts to claim stolen valor in this instance can no longer help them win any additional votes with everyone except Donald Trump and his most terrified sycophants already having accepted the reality of a Biden victory in the presidential election.

Hopefully, the new regime will fulfill its promise to manage the federal response to the COVID-19 pandemic and get the Pfizer vaccine and any other effective remedy in the pipeline to the American people as quickly, safely, and efficiently as possible, no thanks to the previous people in charge.