Donald Trump and his Republican enablers don’t want every American’s vote to count.

The rejection of that basic democratic principle of one person, one vote has been obvious for quite a while as the president railed about non-existent fraud connected to mail-in ballots for long before the first votes were even cast.

Now that those votes are actually being counted, Trump is doing what he long telegraphed that he would do if the outcome of the election wasn’t leaning in his favor — unleash a bevy of lawyers to attack the vote-counting process and try to invalidate the will of the electorate.

After demanding what will likely be a fruitless recount in Wisconsin earlier this morning, the Trump campaign went after the ballot tabulation in another tight race in a crucial swing state, this time targeting Michigan.

Democratic contender Joe Biden overtook the lead in the Great Lakes State overnight as results from mail-in ballots in Detroit and other heavily Democratic areas were added to Michigan’s totals, leaving Trump down by nearly 40 thousand votes.

Predictably, it was to file a lawsuit to bring the ballot tabulation to a complete halt until its representatives are given access to observe the counting process. 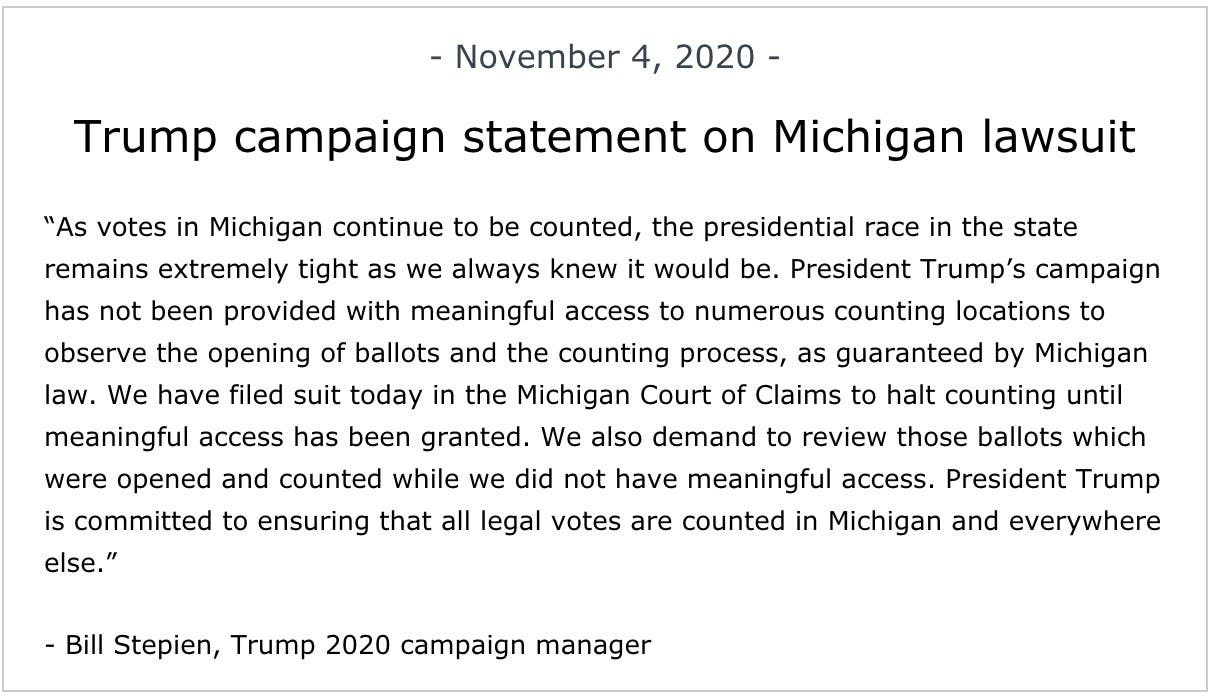 Add your name to states not to cave Trump. COUNT EVERY VOTE!

Stepien may claim that Trump is committed to ensuring that all legal votes are counted, but at this point, his chief aim seems to be to disqualify the valid expression of the people’s will to try to snatch victory from between the tightly closed legs of defeat.

With results from mail-in ballots in Michigan continuing to be counted — and expected to lean heavily towards Biden after the president spent so much time discouraging Republicans from trusting the postal service to deliver their votes — it remains to be seen whether Trump’s stalling tactics will actually be able to affect the final outcome of the contest for Michigan’s 16 electoral votes.

In the end, however, two things are certain: lawyers representing the Trump campaign are in for a big payday and American citizens’ faith in their electoral process will diminish greatly.