It’s long been obvious that democracy is an inconvenient governmental structure in the eyes of the Republican party — an antiquated vestige of those seditious Deists who wrote the U.S. Constitution with idealism and revolutionary fervor in their minds.

The attempts by the GOP to restrict access to the polls through voter ID laws, the closure of polling places, and phony accusations of rampant fraud involved with mail-in ballots, as well as their efforts to dilute the concept of representative democracy through outlandish gerrymandering of districts to ensure “safe” Republican districts, expose the nature of their desire for rule by a minority of the rich white billionaires who fund their party and whose every whim they consequently enact as the law of the land.

Now one Republican senator has dropped all the pretense of believing that democracy is a fundamental tenet of our Constitution and has come right out to essentially advocate that people surrender to authoritarian rule if they want a stable society without conflict and to denigrate the ability of a democratic system of government to provide prosperity, peace, and liberty for the people who participate in it.

Democracy isn’t the objective; liberty, peace, and prospefity are. We want the human condition to flourish. Rank democracy can thwart that.

This post is the most explicit call for fascism ever uttered by a senior government official that anyone could ever imagine.

This tweet is the most frightening repudiation of democracy that this nation has heard from someone sworn to uphold the Constitution that outlines just how our democratic government operates.

One can only hope that the senator who tweeted this shameful opinion about the value of democracy — Senator Mike Lee (R-UT), one of three Republican senators who were diagnosed with COVID-19 after attending the White House reception celebrating the nomination of Amy Coney Barrett to the Supreme Court seat that became available after the death of Justice Rith Bader Ginsburg — is taking the same course of the steroid Dexamethasone as a treatment for his infection that has sent Donald Trump into his latest manic episodes since that would be the only excuse for such a treasonous expression of his authoritarian desires.

Senator Lee claims that our nation has never been a democracy, but instead is a constitutional republic.

The word “democracy” appears nowhere in the Constitution, perhaps because our form of government is not a democracy. It’s a constitutional republic. To me it matters. It should matter to anyone who worries about the excessive accumulation of power in the hands of the few.

Sign the petition to tell Mitch McConnell: No vote on a new Supreme Court Justice until after inauguration!<

While the unamended Constitution does include such undemocratic provisions such as the counting of slaves as worth 3/5ths as much as a free man for purposes of representation and the disenfranchisement of the female half of the population, subsequent amendments have steadily moved our governmental structures towards full democracy with the elimination of slavery and the granting of suffrage to women.

Senator Lee’s warning about “the excessive accumulation of power in the hands of the few’ is deeply ironic and hypocritical coming from a member of the party that has governed almost exclusively for the benefit of the billionaire oligarchs who own our nations largest corporations and for the minority that is the right-wing conservative movement in this country while ignoring the will of the majority of Americans when it comes to health care, reproductive freedom, social services, and so many other issues.

The people who responded to Senator Lee’s tweets were justifiably outraged by his belittling of democracy as our nation’s ruling principle.

I disagree with his policies, but this man does know conservatives from the inside:

"If conservatives become convinced that they can not win democratically, they will not abandon conservatism. They will reject democracy." – David Frum

I wasn't hyperbolic when I said he is another pawn of Putin. He confirmed it for me when he walked away from official GOP talking points after the killing of Soleimani and was just as angry as Putin. Along with Rand Paul and Carlson

Exactly. And that's the @GOP's objective. The entire Republican ideology apparatus has that as it's ultimate goal; it's essentially the 4th Reich on American soil & wrapped in a flag & carrying a bible, neither of which do they adhere to the principles of.

Propefity is the pinnacle of covfefe. Pay attention, Scott.

Mike, You ought to be deeply ashamed of yourself. This is the stuff of autocrats.

The GOP needs to either disavow this ugly statement or accept the fact that they have become the anti-democracy party. This is the slope toward Fascism.

At least, Senator Lee is forthright about his fascistic yearnings, unlike those Republican politicians who espouse democracy yet do everything they can to undermine it quietly behind our backs.

The Utah senator’s honesty about his despicable elitist aims should inspire everyone to exercise their franchise and vote the GOP out of office in every possible race while they still have the opportunity to vote.

Judging from Senator Mike Lee’s tweets, if the Republicans regain full power, only the rich landowners may be afforded that privilege in their dystopian vision of how our nation should be governed once our “rank democracy” is destroyed under GOP rule. 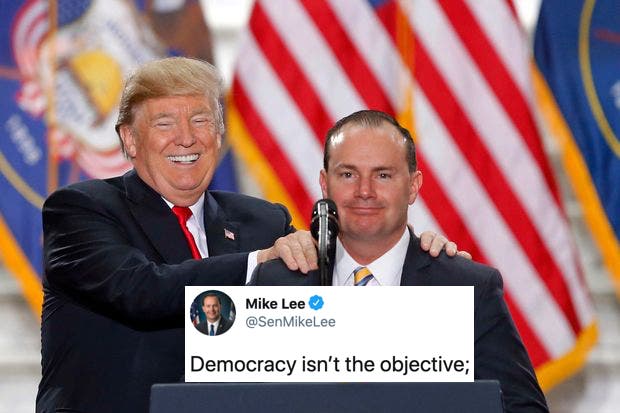