As racism and racist violence towards Black Americans by white supremacist police and white citizens once again rears its ugly head with viral videos of a horrifying police murder and a racial profiling incident, a third video is beginning to take off on social media once again showing the ease with which white American use calling the police as a way to threaten violence and force obedience from Black Americans.

A group of young black entrepreneurs found themselves racially profiled in the private gym in the WeWork building where they have their office and quickly began recording the incident. A white man, who identified himself as “Tom Austin,” began accusing the black men of not being allowed to be there, demanding to know what office they were in the same judgmental way that so many other nosy, racist whites have done in countless other videos.

a group of young black entrepreneurs have owned a office building in uptown minneapolis for over a year& got racially profiled at the private gym today🤦🏾‍♀️smh pic.twitter.com/iKmAuW5Tli

The profiling victims, who say they run the TeamTopFigure social media marketing company, posted the following message to their Instagram following the incident: 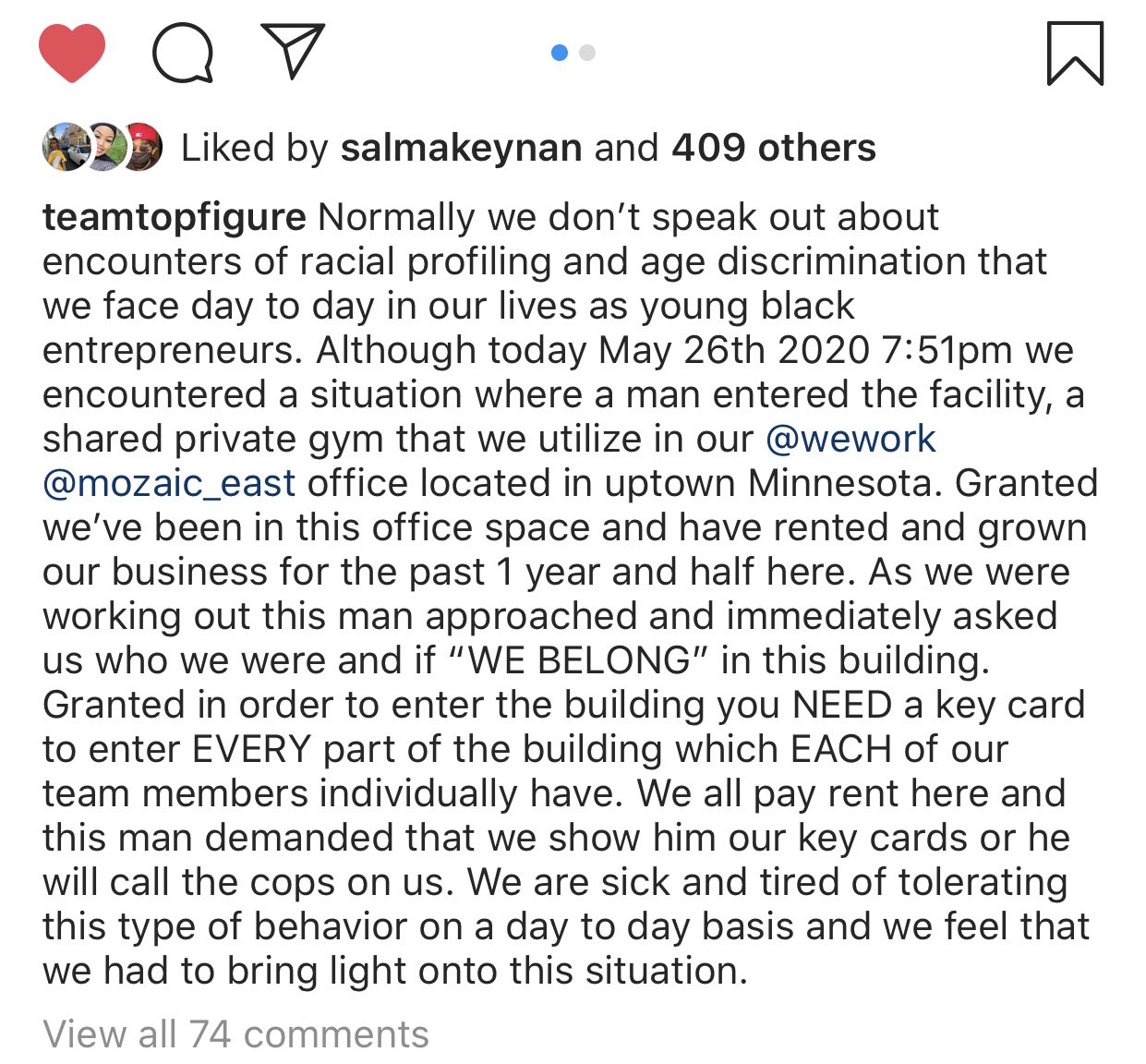 The events of the past few days have put into new perspective how whites knowingly use their ability to call the police on Black Americans as an implicit threat of violence — and how eager the police are to deliver on that threat.

We were first treated to the repulsive sight of area white woman Amy Cooper threatening to call the police on a Black birdwatcher and lie about how she was in danger following an altercation about her unleashed dog in a leash-only park. A day or so later came the gruesome video of Officer Derek Chauvin jamming his knee into the neck of George Floyd as the man cried out in pain, repeating “I can’t breathe” over and over again, immediately bringing the NYPD murder of Eric Garner to mind.

These incidents come on the heels of two other high-profile killings of Black Americans in recent months with disturbing police involvement.

Ahmaud Arbery was murdered in cold blood on video by two white men — and police did nothing until the video was released to the public.

Breonna Taylor, an EMT worker, was asleep in her home when police busted in late at night with a no-knock warrant. When her boyfriend began to fire at the intruders, thinking they were burglars, the police began shooting back blindly and killed Taylor with eight bullets — and arrested her boyfriend for attempted murder.

Videos like the one above make it painfully clear that not only is white supremacy is alive and well in America’s people and its institutions, white people fundamentally believe that the police are the instruments of its expression. Spread his shame!