A Florida man is protesting the impeached President Donald Trump by using large placards on his golf cart and apparently triggered some of his many pro-Trump neighbors, leading to written threats and demands for his arrest.

But Sumter County sheriffs won’t go after the anti-Trump protester at the request of his tormentors in Florida’s most pro-Trump town, an enormous retirement mecca called “The Villages.”

Ed McGinty is a “well known” political activist, according to the Village News, who “was parked in his golf cart in the grassy area by Odell Circle with signs on his golf cart that read “Trump Is A Sexual Predator,” “Trump Filthy Pig,” “Trump Compulsive Liar,” “Trump Bigot and Racist” and “Hitler And Trump Exactly Same DNA.” 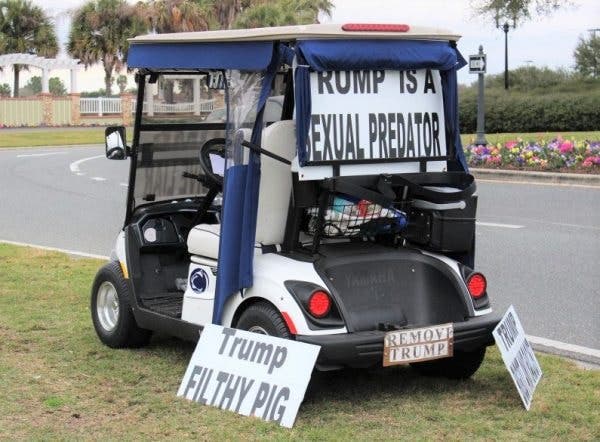 Yesterday was different, however, because his political protest was met by a credible threat of violence against McGinty’s family:

McGinty said he was partially driven to protest today by a threatening note he found on his door this morning that read: “Be very careful if the well being of your family is of importance.” He said he reported the threat to the sheriff’s office, but notes like that won’t keep him from expressing his political views.

“The people that threatened my family, they don’t scare me,” he said. “They just embolden me.”

The threats only served to inspire McGuinty, who lives in a city of 122,000 people that is quite literally owned by Republicans and is one of the most heavily GOP registered places in Florida. It is also one of the party’s fastest-growing areas as retirees flock to a community better known for grandparents known for excessive binge drinking and who regularly get DUIs in golf carts.

One of McGuinty’s fellow Villagers confronted him on camera, called the police and demanded his arrest. Villager Marsha Hill pulled up to the Democrats and provoked a “nasty tiff over Trump” which she plans to send to the Trump 2020 campaign, the News reports:

“He called me a pig!” Hill screamed as two Sumter County sheriff’s deputies arrived to speak with McGinty. “He called me a pig for no reason because I asked him why he thought the president was a sexual predator.”

“That’s blasphemy,” she said of McGinty’s signs about Trump. “You don’t say that about the president of the United States.”

Sadly for Hill, the Sumner County deputies refused to violate McGinty’s free speech rights under the First Amendment and informed him that they’d received numerous complaints about his protests and he’s free to keep doing so just as long as he doesn’t block the golf cart paths.

“Trump people have been running around saying ‘Lock Hillary up’ for years and I just got tired of it,” the Democratic villager told his local news. “Somebody needs to speak for the Democrats.”

Saying that Donald Trump is a criminal isn’t even controversial. His former lawyer Michael Cohen pled guilty to a felony hush-money scheme that Trump directed during the 2016 election, then brought proof of his personal participation to Congress.

Public polling indicates that well over 60% of Americans believe that the President is a criminal, as of last year. More recent polling from the start of Trump’s impeachment trial indicates that 32% of Republicans think that Trump is committing illegal acts.

Just like the impeached president’s bunkum defenders in the Senate, his MAGA minions are reduced to solipsism in “defense” of their criminal President, because there is literally no more defense for the indefensible Trump administration.

Now that Democrats are out in the places where these fair-weather constitutionalists live and they’re speaking out against the rampant lawlessness and utter immorality that impeached President Trump brings to the Oval Office, these pro-Trump supporters haven’t any excuses left for the corrupt behavior of the demagogue they’ve elevated to the highest office in the land.

Original reporting by Larry D. Croom at the Village News.