After Trump’s impulsive decision last week to kill top Iranian general Qasem Soleimani, the world finds itself in an extremely precarious position. It’s as yet unclear how Iran will respond to the targeted killing but they’ve already announced they’ll be resuming their halted nuclear program and threatened to kill Americans. War, while certainly not a foregone conclusion yet, seems closer than it has in a long time.

There are countless unforeseen ways in which things could suddenly escalate and at times like this one wishes we had competent leadership in the White House. Instead, we’re being led by a mob of crooks and imbeciles for whom war with Iran seems like either a casual decision or a desirable one. President Trump floated the idea of committing war crimes over the weekend by threatening to bomb Iranian cultural sites. The next day, he doubled down on his bloodthirsty rhetoric by stating that his tweets should be interpreted by Congress as an official announcement that he “will quickly & fully strike back, & perhaps in a disproportionate manner” in response to any Iranian retaliation.

At around the same time, Donald Trump Jr. was posting a photograph of himself on Instagram which seemed aimed specifically at inflaming Islamaphobic sentiments and painting any possible U.S.-Iran conflict as a holy war. As pointed out by Pulitzer Prize-winning writer and journalist Douglas A. Blackmon, the First Son posed with a rifle emblazoned with a “crusaders cross” with part of the weapon shaped to look like a medieval knight’s helmet.

In addition to the obvious loaded implications of the president’s son invoking a historical Christian holy war against the Islamic world, the symbol is disturbing because it’s been appropriated by far-right white supremacists in recent years to signal their hatred of Muslims in general and refugees from the Middle East specifically.

Don Jr. captioned the picture, thanking the company presumably responsible for the modification for “adding a little extra awesome to my AR and that mag.” His mindless grin gives the whole thing an even more unsettling feel. 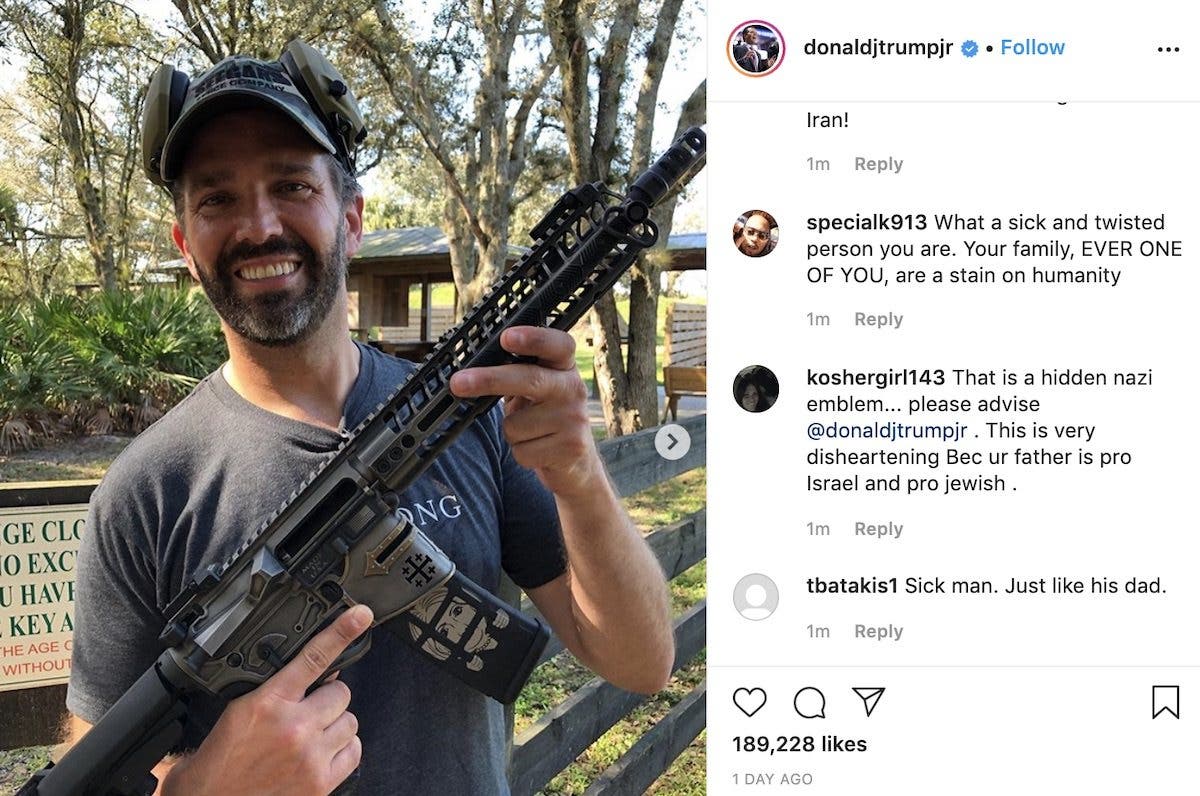 So on the day @realDonaldTrump is threatening to blow up the Middle East, his son posts pictures of himself with a weapon bearing the “crusaders cross,” symbol of war with Islam in the Middle Ages, and today used by White supremacists? https://t.co/LMAx45vFhp pic.twitter.com/hUyow9fkQ0

Let me just repeat that back: the son of @realDonaldTrump has posted images of himself with a weapon bearing a widely used symbol of white supremacist groups……
2/3

….which also happens to have been a major symbol of the medieval crusades/wars between Christian Europe and the Islam world….

While @realDonaldTrump is threatening to bomb civilians in Iran and claiming the right to occupy Iraqi territory.#IsThereNoBottom to this?
3/3

The crusader symbolism on Don Jr.’s gun bears some alarming similarities with the weapon used by the Christchurch mosque shooter in New Zealand last year. That far-right, white supremacist monster scrawled numerous phrases on his gun including “Tours 732” a reference to a battle between Christian Europeans and the Islamic Umayyad Caliphate.

Additionally, Anders Breivik the man who mass-murdered leftists youths in Norway in 2011, was similarly obsessed with fetishizing crusader imagery. It has become a central unifying aesthetic for this destructive ideology and those who adhere to it will almost certainly see the First Son’s post as an indication of solidarity with their warped and violent worldview.

The most charitable (and least likely seeming) explanation is that the First Son is oblivious to the hateful connotations that this kind of picture invokes.  The more likely explanation seems to be that he’s pandering to the Evangelicals who support his father—many of whom see an all-encompassing war in the Middle East as one of the prerequisites for the end of the world and something to look forward to—as well as pandering to the white nationalists who voted for Donald Trump en masse.

Unless the MAGA movement is thoroughly repudiated at the ballot box this November, these people are just going to keep growing bolder and bolder. The unavoidable reality at this point is that a vote for President Trump is a vote for racism and fear.