In an entirely unsurprising turn of events, the Trump Inaugural Committee appears to have been busted for illegally self-dealing. Reporters have uncovered a plot to funnel inauguration funds into Trump’s pockets by jacking up the rental rates at Trump’s DC Hotel during the event — and one of the President’s children was at the heart of it.

Ivanka Trump acted as the middlewoman in an email exchange between the Inauguration Committee’s convicted Deputy Chairman Rick Gates and hotel staff that demanded a $175,000 daily rate for use of the Trump DC Hotel’s public spaces. Gates personally thanked her by email for her price gouging efforts. (see below)

Even the Trump family’s hand-picked event planner Stephani Winston Wolkoff – a dear friend of Melania Trump – who raked in a cool $26 million for running inaugural events, pushed back hard against the excessive billing in an email she sent to both Gates and Ivanka Trump. ProPublica’s reporting revealed this email in which she presciently noted that the Trump family’s bad deeds would indeed become public one day in an audit:

One of Wolkoff’s conversations with Michael Cohen about the inaugural committee’s spending even wound up in the recordings seized by the FBI when the raided the recently sentenced attorney’s office.

While it is very rare for the IRS to audit a non-profit, Donald Trump is already accustomed to being nailed with tax penalties for unlawful use of a charitable organization.

As ProPublica reports, their DC hotel’s overbilling practices could blossom into a six-figure loss for the Trump Organization:

If a person with “substantial influence” over a nonprofit group charges the group above-market rates in a transaction with their outside business, the IRS can impose steep fines.

In this case, Donald Trump could qualify as a person with such influence. Should the tax agency find that a violation occurred, the Trump Organization would have to refund any overcharge and the inaugural committee would be hit with a 25 percent tax on the money, Owens said.

If that wasn’t enough trouble for the Trump crime family’s operations in one day, today’s report also revealed that inaugural Deputy Chairman Rick Gates directed some donors to pay expenses to vendors directly, bypassing the charity’s reporting requirements and opening the door for serious fraud and abuse.

Because the Trump Inaugural Committee was formally incorporated in Virginia, it also means that the opaque party planning “charity” – who only donated $5 million in excess to charity, yet registered another $40 million in unspecified spending – could face yet another Attorney General’s investigation similar to the one which spawned the ongoing Trump Foundation lawsuit in New York.

The Trump Inaugural Committee’s money-hungry, hospitality-poor event planning was so horrific, that it even shocked Bush Administration figures — a group of Republicans not exactly known for fiscal responsibility — as ProPublica reports:

“They had a third of the staff and a quarter of the events and they raise at least twice as much as we did,” Greg Jenkins, who led George W. Bush’s second inauguration, was perplexed by the Trump team’s mammoth fundraising haul, told WNYC and ProPublica this year.

“So there’s the obvious question: Where did it go? I don’t know.”

Donald Trump was briefed extensively on the plans of his inaugural committee, which was headed by Chairman Tom Barrack, a friend of his known best as the “Trump whisperer,” who news reports earlier this year revealed was interrogated by Special Counsel Mueller’s probe.

White House officials are openly nervous about this week’s firehose of revelations about the Trump Inaugural which ushered them into power, so they have responded in typical fashion by blaming the existence of Democrats for all of their woes. 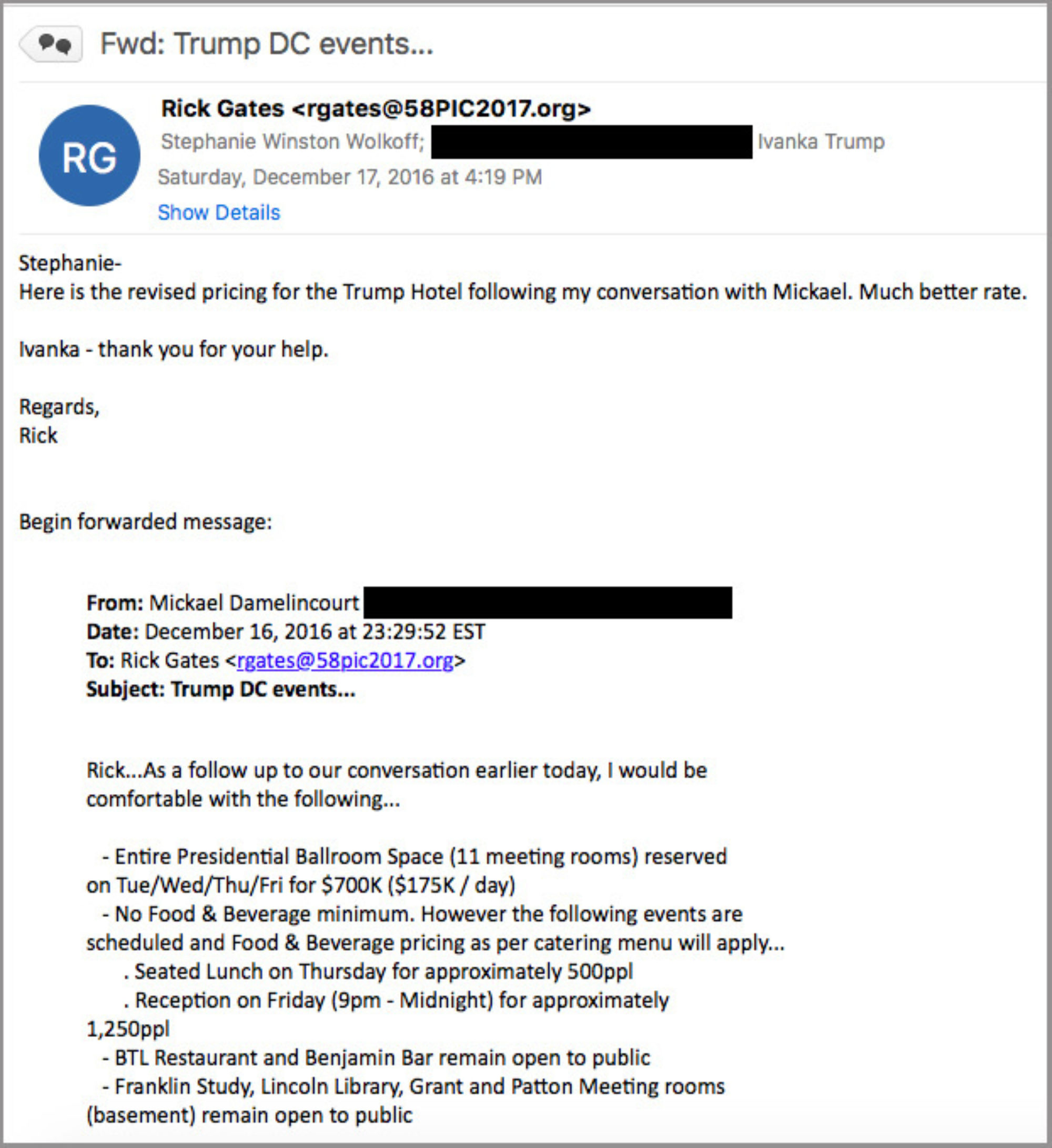 Original reporting by Ilya Marritz at WNYC and Justin Elliott at ProPublica.

Rep. Gaetz’s father alleged to be calling in favors to keep Republicans from talking about his son

The elder Mr. Gaetz is reportedly calling every GOP politician he knows from his days in the Florida Senate to help save his son.

The America First Caucus is attracting the support of the most extreme right-wing members of the GOP.

A life-saving medical registry wasn’t enough of an attraction for these right-wing ideologues.