Despite using it as his favorite talking point to disingenuously pander to the black community – a community among which he has a dismal 6 percent approval rating – this morning’s jobs report showed that the black unemployment rate hit a massive spike in the month of January, jumping from 6.8 percent to 7.7 percent. 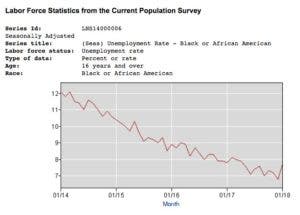 While Trump uses the black unemployment rate to overcompensate for his blatantly racist agenda, the biggest jump in that rate since June of 2012 all but eliminates once of the President’s most touted “accomplishments.”

Trump most recently took to Twitter to congratulate himself for the fact that the unemployment rate for black Americans – a rate that has been steadily decreasing since March of 2010 as former President Barack Obama took the U.S. out of the Bush recession – continued to descend in a public spat with Jay-Z.

Somebody please inform Jay-Z that because of my policies, Black Unemployment has just been reported to be at the LOWEST RATE EVER RECORDED!

Jay-Z, for his part, responded thoughtfully and articulately during an interview with CNN’s Van Jones, explaining that it’s not about money, that money doesn’t equate to happiness. People deserve to be treated as human beings, a point that Trump has woefully overlooked.

Someone needs to inform @realdonaldtrump that I ALREADY asked Jay Z whether black employment figures redeem Trump’s presidency. And Jay’s answer last night on the #VanJonesShow was POWERFUL !!! … Watch the VIDEO for yourself: https://t.co/7Sv3rHKkmW https://t.co/jbHpkKOM5o

While Trump likes to tout unemployment figures, his treatment of black Americans – even prominent ones like Colin Kaepernick, Jay-Z, and LaVar Ball, among others – is a glaring testament to his true respect for that population in America. And with today’s development, Trump’s insincere attempts to appropriate credit for the successes of a community he disdains have gone up in smoke.

Brian Tyler Cohen is a political writer, actor, and comedy sketch director. He graduated from Lehigh University with a dual degree in English and Business. He currently lives in Los Angeles.

Trump was just asked if he would fire Mueller's boss. His answer is disturbing