The top Democratic leadership in Congress has sent President Trump a harshly-worded warning in the wake of his approval of the release of the blatantly misleading and partisan memo written by House Intelligence Committee Chairman Devin “How far can I stick my nose up Trump’s butt?” Nunes.

The letter criticizes Trump’s decision to release the classified memo over the objections of his hand-picked heads of the agencies that he himself ultimately oversees as head of the executive branch of government, calling it:

“a transparent attempt to discredit the hardworking men and women of law enforcement who are investigating Russia’s interference in our Presidential election and that nation’s ties to your campaign.”

“We are alarmed by reports that you may intend to use this misleading document as a pretext to fire Deputy Attorney General Rod Rosenstein, in an effort to corruptly influence or impede Special Counsel Bob Mueller’s investigation.”

Apparently the Democrats are comfortable and familiar enough with the Special Prosecutor that they can call him Bob instead of the more formal Robert, but it doesn’t take them long to express how uncomfortable they are with Trump’s own actions and express a dire warning to the President.

“We write to inform you that we would consider such an unwarranted action as an attempt to obstruct justice in the Russia investigation. Firing Rod Rosenstein, DOJ leadership, or Bob Mueller could result in a constitutional crisis of the kind not seen since the Saturday Night Massacre.”

That the most senior leadership of the Democratic Party in Congress would bring up the infamous firing of the Independent Prosecutor Archibald Cox during the Watergate scandal is telling as to the point in the Russia investigation that we have reached.

If Trump musters enough audacity, or stupidity and self-destructiveness, to take any of the steps that the Democrats warn against, we may see further parallels to the Watergate conspiracy, hopefully resulting in the same fate for Trump that Nixon was subjected to, minus the post-presidential pardon.

You can read the full text of the scathing Democratic line in the sand below. 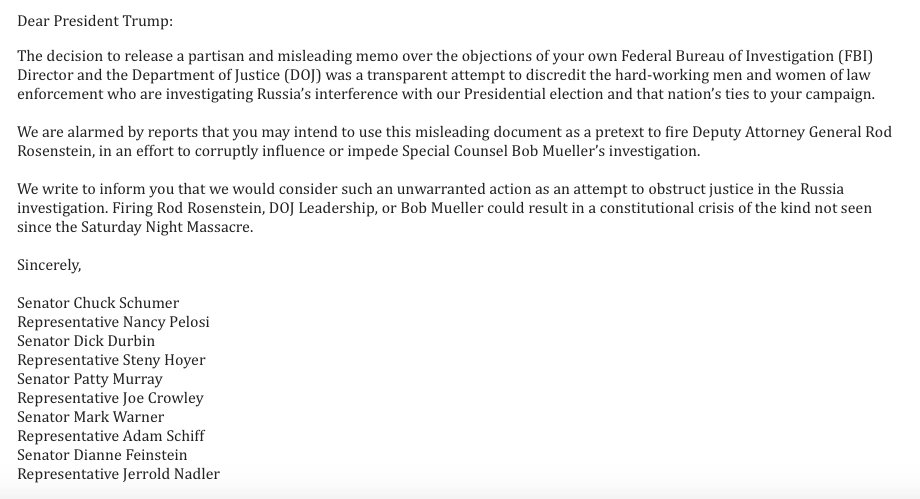 Social media erupted in outrage at the clearly premature move to drop restrictions.

The employees of the right-wing news channel expressed their anger over Kayleigh McEnany’s new job.

The ex-White House spin doctor will not have much of a learning curve in her new role.