Even if Steve Bannon wanted to deny his explosive betrayal of Trump’s secrets in the bombshell expose Fire and Fury by author and journalist Michael Wolff, he could not.

Wolff captured the entire interview on tape.  And many more facts from the book have proven verifiable.

Here is the wide array of subjects on which Bannon expounded for which Wolff has audio proof: 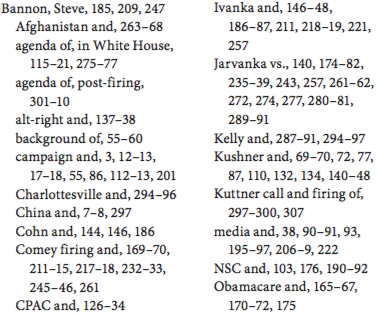 Wolf has “dozens of hours” of taped interviews with all sorts of senior White House aides, including Bannon and White House deputy chief of staff, Katie Walsh, according to today’s scoop in Axios.

‘Where’s Donald on this?’ asked Ailes, the clear implication being that Bannon was far out ahead of his benefactor.

“I wouldn’t give Donald too much to think about,” said an amused Ailes.

Bannon snorted. ‘Too much, too little — doesn’t necessarily change things.’

‘What has he gotten himself into with the Russians?’ pressed Ailes.

‘Mostly,’ said Bannon, ‘he went to Russia and he thought he was going to meet Putin. But Putin couldn’t give a shit about him. So he’s kept trying…’

Axios also confirmed that, despite the Trump administration’s protestations to the contrary, Wolff spent “hours at a time in private areas in the West Wing, including the office of Reince Priebus when he was chief of staff.”

The West Wing was not the only place where sources spilled the beans to Wolff, either.  When he visited D.C., he stayed in the Hay Adams Hotel.  Trump’s staff would cross Lafayette Park to rendezvous with the writer and give him the straight dope.

These were the days before John Kelly came on as chief of staff.  White House aides were leaking to everyone who would listen.

Though the White House and some journalists have questioned the veracity of Wolff’s granular details, today’s report proves he had unique inside access that gives great credibility the the shocking scenes he describes in the book.

The President must be quaking his boots that Wolff taped his conversations with his inner circle.  Whatever respect to which he still clung is in tatters and blowing away with the wind.

Lucia Brawley is a Harvard- and Yale-educated writer, producer, actor, and political organizer. She runs the progressive political Facebook group Consenting to Lead. To learn more, please go to luciabrawley.com. Follow her on Twitter: @luciabrawley

Trump just humiliated himself on-camera with a glaring vocabulary mistake